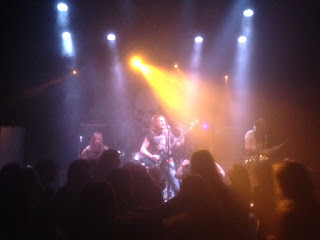 Ranger was coming to Leiden and what I saw of them on the internet looked promising enough. Support band would be Rosie a band I first saw some thirty years ago. Now on the same evening de Nobel could book Batushka and Arkona on their European Pilgramage tour. So a deal was made prime time got the Polish Black metal invasion and the after party would be in the small hall with Ranger and Rosie. As staying home until ten seemed pointless I decided to warm up with the Polish Black Metal tour and move to the party thereafter. 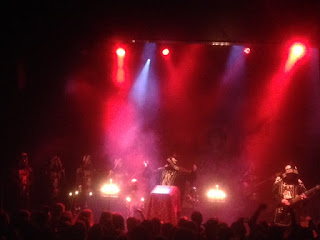 Arkona was on stage when I entered the main hall. At first I thought drums came from a box, but a drummer was sitting at the side of the stage. Arkona plays Black Metal with some symphonic intro tapes. It sounded good, but lacked variety for me. What stuck most of the show were the guitarists with painted faces, but wearing white hoodies. After a break with stage preparations Batushka could start. I mention stage preparations as Batushka are mainly about the stage set. Last year they played the small hall where the stage was too small for the eight members. Now they had space enough, but that made them not a moving band. All standing still they play their gregorian black metal with precision. Similar to last year I got the impression that this band is all about the gimmick and how long would that work. Well I might be wrong as I only saw more people in de Nobel during Saxon. A full hall appreciating a band that I probably just don't get. Good for them. 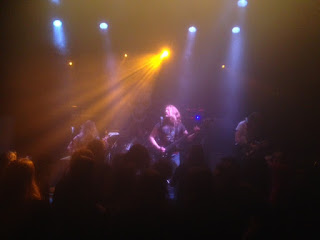 At 23:00 the doors to the small hall opened and we walked into a heavy metal party from the eighties. DJ Virginkiller set the tone with Running with the Devil, Killed by Death and For Whom the Bells Toll. If ever a band entered a warmed up venue it would be Ranger this evening. Many people stayed and also some just arrived from other shows to see Ranger and Rosie perform. Finnish Ranger plays speed/thrash metal in the style of some thirty years ago. This was the perfect fit for the atmosphere that was in the room. Their main characteristic is that they play fast. This comes together with many solo's shot at us in full speed so what was there not to like. At times I thought I heard some Agent Steel with the high shrieking vocals. The beer soaked floor turned out to be a dangerous place for slam dancing and even a crowd surfer appeared above our heads. Following up a Black Metal show it strikes how the mood changed. From standing stil in the main hall the small hall was just a good old fashioned metal party. Meanwhile Ranger thundered on and had a great show. I did get their last album Speed & Violence which has a nice eighties cover as well. In June they play Josie's current hometown Beja, so maybe I can see them playing under the sun one day.

As it was getting later many people left for trains and busses and when Rosie started it was a lot calmer already. That did not seem to hinder them and they blasted their Rock & Roll over us. With a name like that it can not surprise anyone that they play in a style not very far from AC/DC. Actually at times I was not sure if it is an own song or an AC/DC cover. Being around for thirty years they know how to play and the mood stayed good. As I also wanted to catch the 01:15 train I left when the singer announced they had three more songs. An evening divided in two it was and anyone with eyes could see that nothing beats eighties metal parties really.