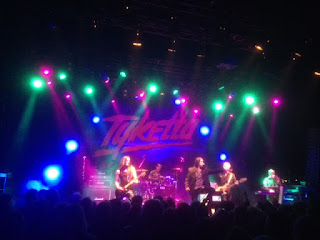 Tyketto passed de Boerderij yesterday for their 25th anniversary tour. Considering they formed in 1987 and released their debut album in 1991 I guess they are just better musicians than mathematicians. Their first two albums "Don't Come Easy" and "Strenght in Numbers" were two classics from the Melodic Hard Rock scene in the early nineties, so this was another show not to be missed. I remember us gathering a large group to see them tour their Strenght album with Riverdogs and Shotgun Symphony in both Paard The Hague and Tivoli Utrecht. Yesterday in spite of my plugging on our concerts app it was not to be a great group any longer so Hans and I had some beers and some Melodic rock in a decently filled Boerderij. 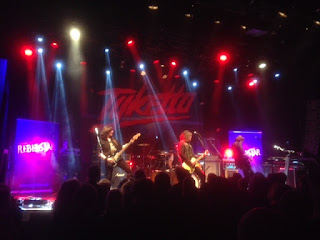 Openers were Rebelstar from my hometown, so we saw them several times before. They play melodic hard rock and do so fairly well. What we agreed on now was that their show came over better in smaller venues Musicon and Baroeg. This mainly because there were now too many disinterested people around talking loud and staying near the bars. Closing with  Hell Yeah I guess they won over a few new fans as they are musically rather well fitting the headliner. 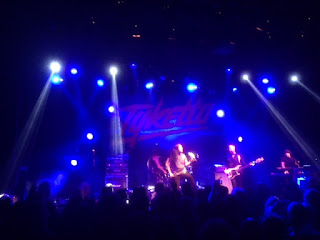 A tape introduced Tyketto and bits and pieces of their biggest hits passed already. When they were on stage the first point that struck me was that we were in for a very professional show. Kick Like a Mule was a new opener and Wings was the first oldie from the videoclip years. Tyketto were one of those bands who had timing not running in their favour. The early nineties saw us great bands not matching their best years albums any longer (Metallica, Dio, Iron Maiden, Queensryche) NWOBHM was long gone and hair metal was ending. Death and Black metal grew big, but I needed until later in the nineties through Cynic, Amorphis and Opeth to appreciate grunts and extreme vocals. My harder edge contained bands like Watchtower, Annihilator and Toxik. Grunge came on and apart from some good songs that was never my thing ( I remember Pearl Jam touring Ten being pretentious dicks in a club show in The Hague and never liked them since) Progmetal was getting a genre with Fates Warning releasing their best selling albums, Dream Theater returned with Images & Words and Psychotic Waltz became the best live band of the decade. So drifting off topic my point is that melodic hard rock bands would suddenly serve much smaller markets. Lillian Axe and Riverdogs were my favorites at the time. Tyketto followed closely and yesterday we could see why. Songs like Burning Down Inside, Catch my Fall or Rescue Me still stand strong. Actually the new songs from Reach and Dig in Deep went down as well. Highlights of course for all the old fans (bands like these hardly grow young fans) were the biggest hits. The obligatory ballad is Standing Alone still wonderful. The song intending girls to take their clothes off (according to introduction) Lay Your Body Down remains a shout along of class. As the girls aged together with the men in the audience maybe it was not a bad thing that no bra's flew towards the stage. After leaving shortly Tyketto came back for their biggest hit Forever Young. With a house full of people in their fourties and fifties, but still rocking this was  a suitable line to sing along indeed. So we got a good show, many songs that took me untill the chorus before saying o yeh that one and no issues on the performances. I only wonder how many American bands we are going to see this year dedicating a song to (Big Money yesterday) and apologizing for the disaster that is happening today over there.