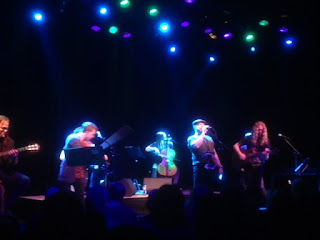 Geoff Tate the whole story acoustic tour stopped at de Boerderij. Last year he played with Operation Mindcrime in Tilburg and that was one of the bigger surprises on the live front. Avoiding what he cannot reach any longer his voice did well, so did the band. Now we were promised acoustic versions of his career with some story telling around the background of songs. Reason enough to go and see him again. Coming onto stage Geoff Tate showed to be into fashion again. Last year he looked with hat and suit like a Chicago mobster, this year the tweed vest and cap made him go Boston Irish. At the end of the evening it was explained by the fact that his guidig band were Irish next to Operation Mindcrime guitaris Scott Moughton. No support band only Geoff Tate so bring it on Pieter and Lida thought with me. 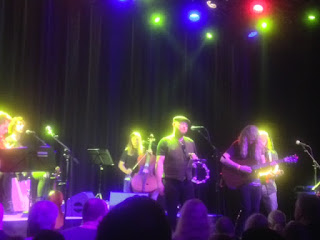 Opening with Walk in the Shadows it seemed we were in for a good evening. The band consisted of two acoustic guitars, a drum board, a cello, one violin and a mandolin. This was the perfect background on the softer side as I have not heard Geoff Tate singing so at ease and thus good for years. Some screams and powerfull outbursts were swapped, but we heard bits of that voice again, That voice made Queensryche one of the best bands in the eighties. During the set one point became interesting. This set-up made some average songs come out really great, while some of my Queensryche favorites did not come out all that great. Starting with the latter, Take Hold of the Flame was played in such a way that the backshouting of Take Hold was saved only for the end. The Lady wore Black is a great ballad due to the emotional high screamed chorus. Now tuned down some octaves it lost power. Highlights on the other were plenty as well, with to me surprising highlights in Some People Fly and Out of Mind. Eyes of a Stranger is good in whatever version played and also sounded great tonight. There also was as announced some storytelling inbetween. While at some points it gave some interesting background on what a song really is about, at other moments it drifted along pointlessly as in Nashville stories. When the regular set was over I was curious for the encore, as many obligatory classics passed already in Eyes, I don't Believe in Love and Jet City Woman (boring as always). Then came the only disappointment in closing down with an unknow song to me about all around the world all you need is love. Christmas time or not I could have tipped many better ways to end such a nice evening.

Looking back on the evening I thought this to be a great solution. Backed up acoustically we could hear why Geoff Tate is such a great vocalist. Some highs are avoided, but that is known on forehand. Bringing an Irish band along helps as well, since the Irish must be one of the most sympathetic people on the globe so no arrogance on stage. Actually I would like to see him repeating this formula next time on tour. For the old metal versions we have Queensryche touring and this is really something different. With a back-catalogue of 17 albums I have enough suggestion for him. So if this reaches the band please include next time: Someone Else?, London, ,Anybody Listening? and why not Roads to Madness.
Posted by erikprogtricolor at 11:12