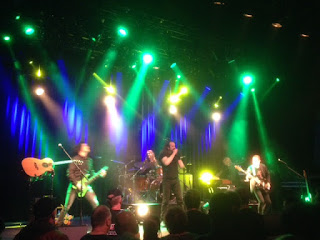 The last evening in Holland for me this year and I could close the year in style with Headspace playing at de Boerderij. While Headspace is a band of many talented musicians to most it is just another excuse for Damian Wilson to come back to de Boerderij. So as gurantees we have, his walking through the audience before and during the show. His great voice and his entertaining stories inbetween songs. As those introductions can drag on we saw several times this evening either the drummer or the keyboards just starting and keep things going. Of course the rest of the band are no slouches either and especially guitarist Pete Rinaldi got some well deserved spotlights on him. Before Headspace played we were warmed up by Dutch band Beyond God. As this female fronted metal is not my thing we waited in the bar for the main act. 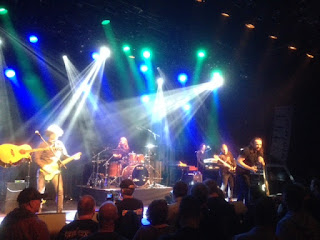 Headspace opened with a song from the first album and I quickly noticed that I did recognize songs, but not all the titles. They released their second album begin of this year and I must say it sounded to me less than their debut album. Going to see them live was therefore good to fully appreciate All That You Fear is Gone as well. This worked to great effect as especially The Science Within Us and Kill You With Kindness came out very strong. The set did not contain too many songs, but I believe we only got epic songs plus one short ballad in Soldier. Damian Wilson is the best performing vocalist in prog rock and metal and this show proved Headspace to have the potential to be amongst the big names in the genre. The audience was not huge, but many of the Progpower northern half of Holland came to see them. Tonight the southern half can see them in Weert. I would say do so as they are great. They announced being back in Holland April next year. Shall be funny if they choose 2 April a date already filled with I believe 5 shows I would normally go and see. The live show year ended for me and now I can go struggle to decide which were the 16 best ones of 2016. More on that later. 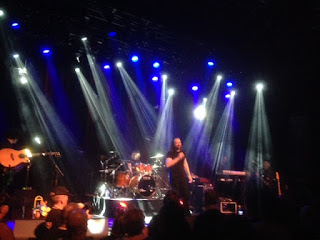