It's that time of the year again where you put yourself to the impossible task of ranking this year's albums. Making a shortlist was already impossible, so I started applying some rules to help me decide. Several bands released good albums, but not their best ever. So out went: Haken, In Mourning, Big Big Train, Wolverine, Dec Burke, Headspace, Cosmograf, Frost*, Tiles, Gojira amongst others. Some just did not make it as there are only 16 places. If I would make the list on another day they might very well have entered the list, so sorry to Witherscape, Salem, John Wesley, Graham Bonnet Band, Perihelion Ship and Them. One album is still on the way to me and definitely a candidate from what I heared on bandcamp, but a Sense of Gravity is not shortlisted by late arrival. Cutting the introduction short herewith my favorites of the year starting as one should at 16 building the tension.

16: Redemption - The Art of Loss
Redemption is a guarantee for quality and this one fits in well in their discography. Only point is that it became just another great Redemption album, without a song to match Sapphire. Very solid progmetal release.

15: Sinistro - Semente
The only representative from my future home land Portugal.This band makes a rather unique mix of doom metal with poetic female vocals over that. I missed them both times they played Holland this year, but loved this discovery.

14: Future Corpse - Another World to Consume
I played this album many times and still cannot hum along with the songs. Crazy complex stuff sounding as if At the Drive-In are playing progmetal.

13: Lee Abraham - The Seasons Turn
Lee Abraham is the one in the British Prog Rock scene that keeps on improving himself. Helped by a range of great vocalists this is the best prog rock album of the lesser known bands to me this year.

12: Mistur - In Memoriam
The older I get the heavier my taste is developing it turns out. This Epic Viking Black metal from Norway ticked all the right boxes for me Great story, moodswings, performance and songs.

11: Poem - Skein Syndrome
Greece has a reputation of high class Progmetal bands and Poem is another hit. Slightly grungy flavored this is a very catchy album. Coming at us with Persefone this spring is one to look out for.

10: Montra - The Machine
One of my discoveries through Prog Metal Zone this year. An american Progmetal release mixing the melodic and the heavy nicely. Ending in style with an epic.

9: Borknagar - Winter Thrice
This band arrived to me from Black Folk at atmospheric Heavy Metal. Beautiful songs from this Norwegian all star combo. Their logo might scare of potential fans as this is highly accessible metal which justifies headliner status at several medium sized festivals.

8: Insomnium - Winter's Gate
The Epic album of the year title goes to Insomnium. Produced by Dan Swäno this one does recall the Crimson concept albums. Beautiful album and they shall officially open my 2017 live show year in Biebob 13 January.

7: Marillion - F.E.A.R.
Marillion making me very happy with one of their best releases ever with Hogarth on vocals. Intelligent lyrics, great long epics and plenty of guitar solo's. I love surprises like these.

6: Diamond Head - Diamond Head
This selftitled album can stand proudly next to their best work from the eighties. A great new vocalist and those signature sound guitar riffs. Comeback album of the year.

5: Oceans of Slumber - Winter
My favorite album from the first half of the year. Changing to a female vocalist who stays far from operatic annoyings still these great songwriting skills that made their debut my album of the year in 2013. This band should be the surprise of Progpower to many I am sure, so let's get them to Baarlo.

4: Watchtower - Concepts of Math: Book One
If this would be a full album and I did not have four from the five songs digitally already this for sure would be my album of the year. Watchtower the founding fathers of Tech Metal are back!!! I rest my case.

2: The Reticent - On the Eve of a Goodbye
Seldom before such an emotional concept album has been released. Realising this is a solo effort by Chris Hathcock makes it only the more impressive. He has a touring band so bring this to Europe. Hearing this one often the impact is still there. Invest time in this CD and you will be rewarded.

1: Vektor - Terminal Redux
I missed this band in the past (corrected that by getting their first two albums as well). So this high tech speedy thrash metal with progressive traces completely blew me away. Mostly fast and furious there is space for instrumental madness, a ballad, and Pink Floyd as well. I did see them perform this album almost full in Little Devil confirming my thoughts. The future is Vektor. 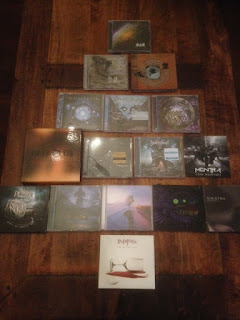