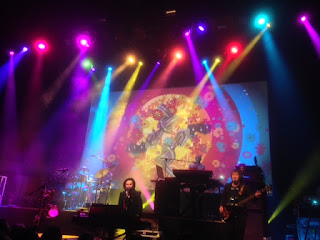 Marillion and John Wesley both released among the best progrock albums of 2016, so I was more than a bit pleased when I learned last week I could go see them live in Vredenburg. I never was in Tivoli/Vredenburg after their huge and far too expensive renovation. Entering the enormous building turning left we ended up in the old hall I have been several times before and nothing changed, Even Marillion I saw there before in 1985 with the Misplaced Childhood tour and in the early 2000's I believe at their Marbles tour. 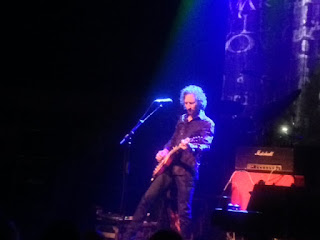 Warming us up was John Wesley. Unfortunately instead of a live band he brought some boxes along. So we got the solo version assisted by technology. I must say a missed chance, since those not familiar with his work showed little interested. A Marillion crowd can be narrowminded and tough to win over anyway and doing it on your own is even harder. I saw the vocalist of Jadis trying this as well in the past and not coming over. Damian Wilson has the stage personality to pull this off and Rob Lamothe also convinced solo in the past. John Wesley was half succesfull. From his last album a way you'll never be he did play the best songs in By the light of  a sun, Epic and the Title track. Still I believe with a full band he might have won more fans over. Now at least Michel got it and bought the last album. 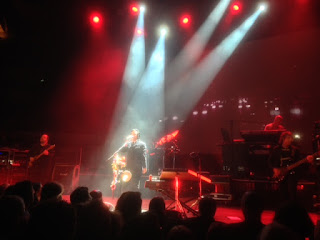 Marillion in current times of doom would be interesting to start with. Their last album touching many topics what is wrong in the world nowadays, shows us that the world would be a nicer place if we had all a Marillion mindset. Yet that is not to be, so we can go into our bubble of hippieness and happiness and see them live. Opening the show was rather obvious looking back, as The Invisible Man starts with the line "The World's Gone Mad". This definitely is one of their best epics ever so a better start seemed impossible. To my surprise they then decided to kill the atmosphere by playing some of their worst material. You're Gone and Sounds That can't be Made are both easily the worst songs of the albums they come from. Following this by Fantastic Place, a ballad made me F.E.A.R. the worst. Well not to worry as in Living in FEAR we got the first new song and both guiding pictures and performance made this a second highlight.The peace-man in me considers the line "We decided to start melting our guns as a show of strenght" one of the most beautiful poetic ones released this year. A medley of Brave songs plus Afraid of Sunlight kept the atmosphere at a high. The New Kings was the second long song from F.E.A.R. This song is all about the rulers of the world being banks too big too fall/fail, Qatar bribing into the worldcup football and cycling, Russian oligarchs and all those things making you uncomfortable if thinking too long about them. Next to a great song the images to this one were very strong. I am sure that watching the money dropping king would have made any PSV fan in the audience (do they even exist above the rivers?) very embarrassed. Easter followed and while being a nice song this one we heard most of all I guess, so a welcome bar break. Ending the regular set we got probably my two favorite songs from the Hogarth era in The Great Escape and King. What a way to end this set. Of course a Marillion show is not over after 100 minutes, so we got some epics to come in the encore. First new song El Dorado again with powerful lyrics and good artwork. Ocean Cloud was a surprise,.Even if not among my favorite very long songs by them, the crowd loved it. And then closing the evening was keeping the best for last. Market Square Heroes.!!! The roof came off and the enthusiasm in the crowd was so much higher than before. 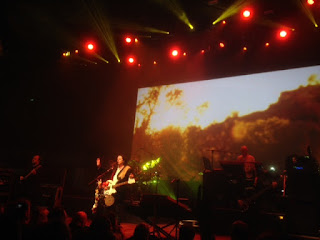 So the evening passed with ups and downs. John Wesley showed his talent, but forgot to bring a band.
Marillion started great and then dropped deep. I did look at setlists from this tour so far and in general we were lucky I guess. The new songs tend to be the same each evening and impressed. My favorites of the evening were The Great Escape, King and Market Square Heroes, all songs rarely played on this tour. The band was in the usual great shape. H remains this mood risk. Tonight he first provoked waiting for someone to shout Grendel and then showed still not being comfortable that Marillion with Fish was just a more popular live band. Their music of the last decades is still beautifull but you can also sit and enjoy. Actually we decided to stand in the arena and it must have been 25 years since I was so close to the stage at a Marillion show (and so far from the bar as Eggie added correctly). Marillion is always top class and even with Hogarth on vocals still among my all time favorite bands. Glad I saw this tour with convincing new material. Even if they did not play my favorite from F.E.A.R. in The Leavers. Did I tell Rothery is God yet?