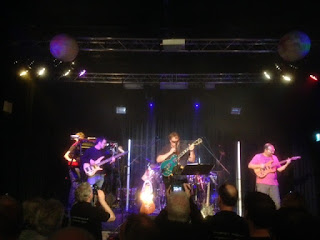 Progfrog managed to stay under my radar until very recently. Before that I knew of their existence and home venue 't Blok, but never really looked for going there. Some weeks ago when I discovered The Gift I noticed they shall be here in February and while at their page I found out that Martigan would play an afternoon show today. With Tiago filling up the living room with sweaty teenagers and my past knowledge of Martigan the choice was easy. I saw Martigan at Night of the Prog once and liked them and their CD of the time Vision. In spite of liking them I stopped following them actively. Playing Vision again I remembered what I liked about them Neo prog with clear inspiration by the British big names. Arriving at 't Blok they  were about to start. The venue is not that big, but perfect for these shows. The about 40-50 people made it busy enough and staff passed every 25-30 minutes with cheese, sausage and bitterballen. Obviously this would make us thirsty, but after Sportmindz Christmas drinks on Friday and Geoff Tate last night I was not after any beers really. Before the band started we were asked to have any loud discussions outside, which was followed through the show giving us the chance to fully appreciate the loud/soft changes. 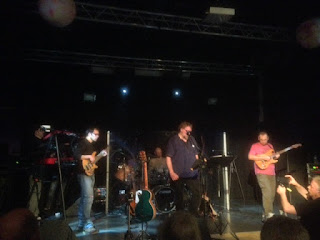 Martigan started with a song of Vision, but without taking notes I do not recall which one. They did play Boatsman's Vision and the Contract as well from that album. Actually it did not matter that much if I knew the songs or not. This was one afternoon of musical excellence, with highlights for mainly guitars and keyboards. At the same time the drums were impressive and the bass was allowed to lead us through Red & Green. This resulted in some different dancing/orchestrating by one fan at the front. In general all songs tend to be either long or very long, This gives a lot of space for solo's and what a delight they were. This band is inspired by bands from the eighties and the quality of the players allows them to come close to the greats. for almost 2.5 hours we were treated on great music. The whole atmosphere therefore reminded me of recent Aisles or Anubis in de Boerderij or Iamthemorning in Patronaat. A small crowd in a small place, but all enjoying big time. This was a very good show and I got their latest album Distant Monsters afterwards, which is playing now. Still I have to end with some constructive feedback to the band. On the presentation front there is quiet some space for improvement. At times it was like watching a CD play at full volume. Especially guitar and vocals did not bring anything. I know it is all about the music in progrock (at progfrog). Yet a sunglassed vocalist that hardly speaks to us inbetween songs and a guitarist looking like any civil servant distracts from the show. A few phrases and a black shirt can solve this. Further  only good news, looking forward to returning here in February.
Posted by erikprogtricolor at 21:38