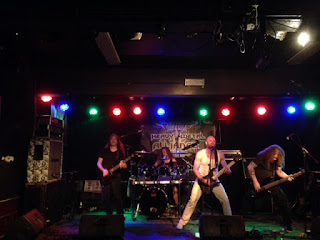 Friday night, home alone and three metal bands in Musicon. So that was easy, although I needed some advice from Josie first. Apart from being my wife she also is my home doctor, away from home now. Calling Portugal and sending selfies taught me that the blood in my eye was probably OK and I should only take it easy this weekend. Nothing better than go and see three Death/Thrash bands for taking it easy.  First on were local band Rages of Sin, only band I knew as I saw them play before. They play Death/Thrash Metal and have some experience in the band. The sound is good, songs have variation in them and presentation is good. They even included a Powah Ballad, although Hair Metal fans of the eighties (guilty) might not consider that song a ballad. What I recalled from them is the white outfit of the vocalist/guitarist while others are in black. Do not know if there is a meaning behind this, but it makes them easy to remember like that. Just a good show and next week they shall be back in Musicon again, so shall I. 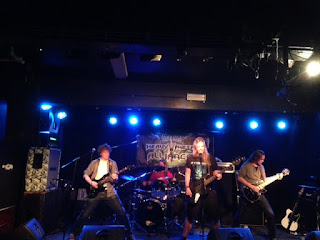 Insurrection are from Friesland and play in a similar style as RoS. The band themselves are much younger, but all four seemed very good musicians. To me it is hard to distinguish any special songs hearing Death Metal for the first time, so no comments on any songs. The drummer told me after the show that they played mainly new material while tipping us on their 5 EUR EP. Playing that one now I do not immediatley recognize which songs they played either. The vocals were harsh and heavy, with a deep grunt from way below by their solo guitarist. Coming to him I have to repeat what I told the band as well. On guitar he was amazing and his solo during the last song came close to guitar hero work from the eighties. On the other hand at one point in time he started banging sideways and to me looked suddenly very much like Jochem Myer (a Dutch comedian with ADHD) this did distract as I was waiting for him to start telling jokes from that moment onwards. Still a good band and a pity that not more people showed up to appreciate them. Actually the generation 15-35 let us down big time. Those who were present almost all seemed to remember metal in the eighties from being there themselves. 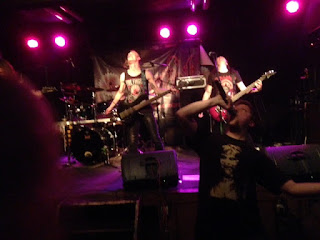 Closing band were Profet from Germany It was good to see that they brought some friends themselves and that actually some people moved closer to the stage as well. What stood out to me most were the different looks of each band member. We had a short haired bearded drummer, a female guitarist, a metal guitarist, a punk/modern metal looking bass player and a vocalist who looked rather average and insulted all mothers on his T-shirt. Together they were a tight band though and actually rather good as well. Sometimes a member left the stage and played/sung from the floor and there were minor attempts at humorous announcements, which is always a risk being German. At times I thought that a true metal vocalist might sound maybe better with this band.

All in all a nice evening out and I do hope that today in Friesland they can attract more of an audience, actually making a wall of death possible by public and not just members of supporting bands.
Posted by erikprogtricolor at 12:07