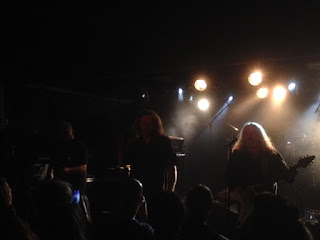 Rotterdam rocked us yesterday all the way back to the early and mid eighties with a great line-up in de Baroeg. Two NWOBHM bands that were big in Holland some 35 years ago and one old Dutch local band, plus a newer Dutch band with some surprises. Opener of it all were Impact who already were on stage when I arrived. I did not know them from the past, so all was new to me. They played a boogie kind of hardrock with nice guitars and a decent voice. Good opening band and funny that they closed the set with a song titled "Never Too Young to Rock!", when the audience showed clear signs of being never too old to rock. 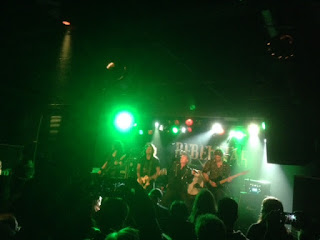 Rebelstar followed, a traditional hard rock band who formed not so long ago, but having an 80's feel to their music. They play often in the area and I saw them some times before, always liking their set. Today they added some bonusses as three vocalists from big Dutch bands in the eighties (Bodine, Helloise, Vengeance) all joined for two songs. This was one of the highlights of the evening, seeing songs like Rock Rosetta, Hard Life and May Heaven Strike Me Down was great. All singers still good by voice, although some microphone issues disturbed Take It Or Leave It a bit. Rebelstar's Serge described the feeling perfectly when he spoke about cycling to Kwintsheul to see Helloise play. I made the same bicycle rides to Kwintsheul and these bands would play all clubs and youth centers around, so we went and saw them often. I do not know who took this initiative of the guest appearances, but thanks for that.  Rebelstar alone we shall see again next month when they open for Tyketto. 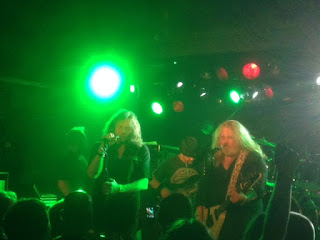 After being ordered out of the hall into the cold outside a sandwich at the BBQ tent was the obvious choice. After the break Tokyo Blade came on and they were to me the highlight of the day. For NWOBHM bands there are basically two ways of approaching a set. Either you play only old songs, that made you big at the time or you give an overview of your career. Tokyo Blade opted for solution 1 and man were they good. The set contained only highlights as Sunrise in Tokyo, Night of the Blade, Midnight Rendezvous, Lightning Strikes and you name them. Performance was very good still very much uptempo and great solo's. Alan Marsh was back and good by voice, but without reading glasses on or enjoying the effects of some local consumptions he messed up some announcements. So when they left the stage they had a spontenaous encore, playing If Heaven is Hell a song that had already been announced twice before. Let's say it gave the show a human face and this song was the perfect closer of a great show. Next weekend they are back in Holland, but I shall be in Portugal. For those interested in seeing a classic NWOBHM show with an almost original line-up don't miss them in Little Devil. Only tip to the band, bring some Merch. This show deserved a patch, T-shirt or CD. 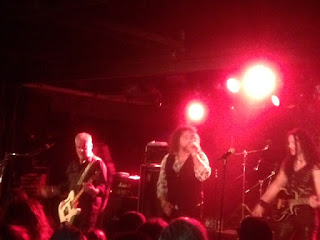 Headliners tonight were Tygers of Pan Tang. Contrary to Tokyo Blade they opted for solution 2 and gave us an overview of their career. Their new album is coming out in a few weeks, so obviously they played some songs from that CD. They further included a song from 2012 album Ambush. This all resulted in a show not getting into full groove anytime soon. When Suzie Smiled  and Don't Touch Me There passed by, atmospheres improved. The set was further somewhat shorter than the announced 75 minutes, so mixed feelings around. Earlier this year I saw Satan play a set of almost only recent songs and it worked really well. Ending the show we got a huge contrast. One but last song was my personal favorite of them Hellbound, sheer glory this song. They ended with Love Potion No. 9. This song alone was the main reason why their career took a steep downward curve in Holland. At the same time a Rotterdam Sinatra clone (they not only rock, Rotterdam sucks at times as well) had a hit in Holland with the same cover. This meant the end of ToPT with commercial album the Cage. Maybe someone should tell them to better skip this song in Holland, no matter it being their greatest hit.

And then it was over at decent Baroeg times, so catching an early train home. Thanks to organizers for this trip down memory lane. My highlights were the Rebelstar guest performances and Tokyo Blade. I am still undecided about Very Éavy festival next year and was considering maybe the Saturday which has a great line-up. Seeing Tokyo Blade I might have to reconsider, yet Roadburn is at the same weekend. Too many options and too little time.
Posted by erikprogtricolor at 12:05