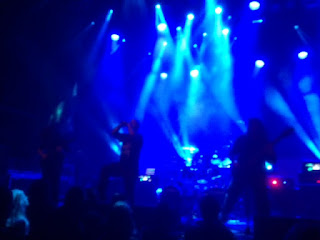 Four technical death metal bands on tour passing Patronaat. Or as David Davidson, vocalist/guitarist from Revocation put it bluntly, any Tech-Death-Fan's wet dream. He was not far off the truth with the bands on stage all showing tremendous skills combining the fast and the heavy. Opening band was Rivers of Nihil, the only band I did not have any music from on CD. I considered them to be the warm up  for the bands to come and that is just what they did. Nice songs and of course good playing. My only concern were in the vocals which did not fully convince me, as being too close to hardcore screams. Presentation of the band and vocalist was good though, so nice enough opener. 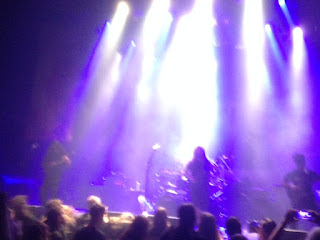 Next on were Beyond Creation. I do have their debut album The Aura, but in the tsunami of new releases and shows had not played it for quite a while. This week I did listen again to it and realized that it sounded rather awesome. That put my expectations for this show pretty high and I can be short they overpassed any expectations and a bit more. Beyond Creation turned out to do everything right on stage. These Canadians to me became the natural succesors of Cynic and Atheist in the nineties setting the new standard for Progressive or Technical Death Metal. The music had long instrumental parts with many spotlights for the bass as well. The guitars moved from very heavy, to extremely fast twin riffs and solo's. Asking for circle pits one minute and hand clapping on slow bits a few minutes later. The grunt was heavy and moved to screams at times. Seeing the time schedule before the evening I could understand the fairly short sets for each band as this music can be very tense and energy consuming. When Beyond Creation announced their last song I was disappointed with the short set and certainly not being the only one. This is their first ever tour through Europe, so pleased I was there to see them. Rarely did I see this heavy and technical music being presented so seemingly simple. Not taking notes cost me on the setlist, but they did play Coexistence and Fundamental Process. After the show got their second CD Earhborn Evolution and the hoodie to match. Amazing show from this very sympathetic band. If  ProgPower is ever to consider bringing back a TechDeath band on the line-up Beyond Creation should be the number one candidate really. I'm still in awe 15 hours later. 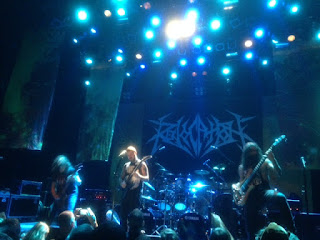 Revocation were the band that made me buy the ticket at first. While long existing I only recently discovered them through their brilliant album Great is our Sin. This is to me almost the best release on the fast and furious Thrash/Death range (sorry Vektor rulezz here) so I was more than a bit curious how they would be on stage, especially after the blast Beyond Creation delivered us. As preparation I would get a beer (shame on you Patronaat EUR 2,70 for a very small beer or 5,30 for a pint and then charge again at the toilets) and stand not too far from stage again. Revocation kicked of with Arbiters of the Acopalypse and while their Sin might be Great we could see all was good. This band plays a different style from Beyond Creation, so there was no sense in comparing. There are thrash metal parts included here and the vocals are not only grunting. Helped by the fact that they opened with some  songs I did know this turned out to be the second absolute winner of the evening. Again time flew by and all was over far too fast. Before the show I already decided that this band deserved support by buying a Tee and their previous album Deathless. Glad to see that Madness Opus is on that one. a killer song. This turned out an expansive evening, but how often do you get blown away twice in a row. 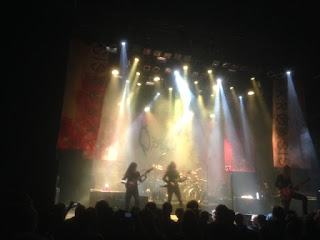 To Obscura the hard task to close this evening in style. Following them I saw the Cosmogenesis tour where they supported Atheist. Omnivium brought them to Patronaat, but the small hall. This time Patronaat granted an upgrade to the big hall due to ticket sales going well. I do not think I saw them with the same line-up twice, but that never hindered the quality of the show. Gaining the longest set as headliner and the largets stage Obscura made things look more major show indeed. Being Germans there is always the risk of a certain slickness, but this time it was less than what I remembered from their previous tour. The music is what it is all about and there is not much to complain here. Most songs came from last album Akroasis, but a highlight was their "hit" The Anticosmic Overload. When they explained Perpetual Infinity being based upon the album Focus, my feelings from hearing the CD were confirmed and  another high in the set was reached. All in all a very convincing set, but to me they were never going to top Beyond Creation or Revocation. When they announced the last song Centric Flow it became time to head for the station catching my train home. A remarkable night with two good shows and two sensational ones. Everyone seeing this package passing by over the coming weeks, make sure you don't miss out.