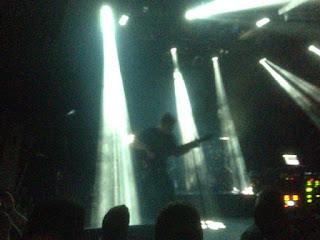 Going to Patronaat in Haarlem for an evening of Djent and instrumental music. Djent is Progmetal's little cousin and the audience once again showed to be Progpower's audience little cousins. Still trying to figure out why the averae age at two fairly similar musical styles drops some 20 years when going to see Djent. First band were Modern Day Babylon, a Czech trio playing heavy instrumentals. They came on the stage and started tuning their instruments spoke some Czech to the sound man and kicked off after a few minutes. The band did not seem too experienced to me, as the bass player asked everyone to step forward and come closer. He learned this from a book, as the young audience was already standing way up against the stage. Bass 6 strings check, guitar 8 strings check energetic drummer check and off they went. There was a laptop on the amps and it turned out that this was a rather important tool this show. After a few songs it started annoying as all songs started with keys, a guitar rhytm or orchestral samples coming out of that bloody laptop. To me it  looked like a band playing along to their own CD. So while the members obviously knew very well how to play their instrument, they had no clue how to entertain the audience, making this a rather forgetable set in spite of some nice banging rhythms along the way. 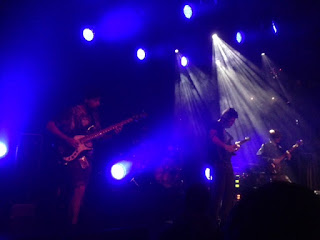 Next on was Sithu Aye with his band. Sithu is a guitar god of this generation and while I do not have any of his CD's I do have some guest appearances of him I believe. Sithu is Indian, but born in Glasgow and he showed us how to put together an instrumental show that does not bore one minute. OK there was again a laptop, but far less prominent. Further the band moved on stage and looked at ease and enjoying themselves. Absolute highlight was the guitar work of Sithu Aye himself. His melodies, riffing and speed on the neck were all amazing. At times it seemed that I was watching Marty Friedman with many fairly similar styled melodies passing by. Sithu also showed the other bands that it is OK to introduce songs (even if being a rather pointless affair with instrumental bands) These 45 minutes flew by and I guess Senpai did notice him. Great band. 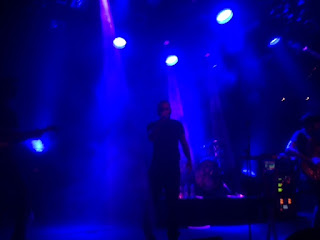 Headliner were Skyharbor from New Delhi India. I do have their debut album Blinding White Noise and love it when bands from non-metal countries surprise us positively (Serdce Belarus!!) . The fact that they are Indian, brought also several Indian people to this show and they seemed to love them, so I do not know how popular they are at home. Skyharbor was also the first band bringing a vocalist this evening, which was nice and refreshing. Their music is building atmospheres, with vocals mostly light. This band again had no issues instrumentally, nor vocally Presentation wise they were struggling somewhat inbetween songs. The singer kneels down in front of the drums and drinks something while the guitarists all turned their backs to us and tuned their guitars, or sipped from a Jagermeister bottle. My suggestion would be that one of them takes the role of communicator and introduces songs or just talks nonsense in between. Now after each song, there was a short drop in atmosphere. Also here several songs started on a laptop, but less disturbing than during MDB. This turned out to be a great band and I think they would look very good on Progpower stage which is known for exotic participants.

So it was again a wise decision to go out and discover something new. Modern Day Babylon know how to play, but to me should work on their presentation. Sithu Aye was the highlight of the evening with a very entertaining instrumental set. Skyharbor are a great band and maybe their modest approach on stage is part of their charm as well. Not often did I go see three heavy bands and no one having long hair on stage nor many in the audience: many beards though and that I can still grow.
Posted by erikprogtricolor at 09:44