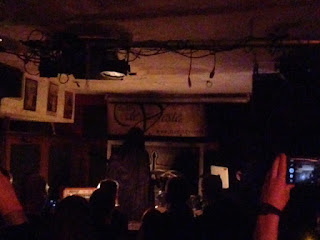 Some weeks ago Arian from THHMA told me about the Wednesday evenings in Leiden, where mostly Black Metal is booked in Studio de Veste. I remembered trying to go to Of the Wand and the Moon in the summer, but had something else that night. So I kept an eye on the agenda. With Josie's recent comment on supporting Latin Americans and the very different music on Lluvia's bandcamp page, my interest was triggered and a quick show was scheduled for tonight. This by far outblasting the interest of my friends in the concert whatsapp group I went alone, which was not much of a problem. No support band, one hour from 9 to 10 show and Leiden being close. Studio de Veste it was tonight. First impressions were of a nice place I passed probably hundreds of times before, but never entered. Due to regular shows there also was a decent crowd when I arrived and for a Wednesday it looked very good to me when the band started. 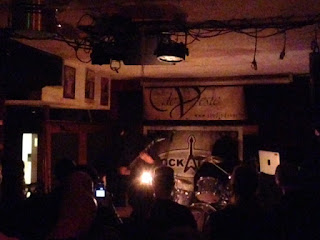 The start of the show itself was a small test of patience for the audience. The three members came on stage in black hooded capes with black veils covering parts of their faces. A zoom started and the guitarist/ vocalist showed his back. This went on for minutes with some heavy gasping inbetween and slowly people started wondering when the brakes would be off and we could blast. I must say the silence of the crowd was impressive, not sure if the very long opening was as well. When the band suddenly kicked of things got heavy and interesting. We were taken for a show, so the three band members stayed in their role and with the capes and veils any interaction was not  in their plans. What I did not see many times before, was the vocalist singing facing the drummer. The heavy instrumental parts and screaming vocals were several times broken with quiet parts and the sound of running water (or Lluvia/rain?) coming from a laptop. During the show the talking in the audience got louder as paying constant attention cost some energy and the slow bits were a bit too many I thought. All in all an interesting presentation. Not the kind of music I would play on CD, but as live experience different enough. Studio de Veste itself was approved and I hope one day Mistur shall be here on a Wednesday.
Posted by erikprogtricolor at 00:01