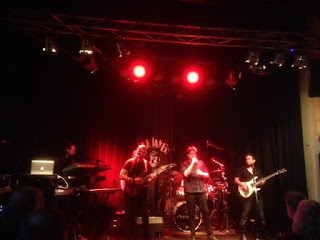 This show had more of a Deja Vu feeling than I actually wished for. Last year the mighty Anubis flew over from Australia for only a few shows in Europe and found a Boerderij so empty that their show had to be moved to the stage in the bar. The good thing was they decided to play over two hours anyway and gave us one of the most memorable shows of the year. I don't know how big the South Pacific Ocean is, but the trip from Chili can only be a few hours shorter. Aisles are the national prog flag bearers and they are here for the first time on a short European Tour. Unfortunately ticket sales were so disappointing that again we got an intimate show in the cafe. While I feel very sorry for the bands involved, to the audience it has advantages as well. You can see two hours of top Prog Rock sitting on a barstool, while Bockbeer is available on the tap. 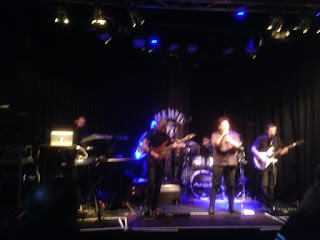 Similarities aside there were some differences with last year as well. From Anubis I have all three CD's and consider them amongst the five best new Prog bands of this century. Aisles is fairly unknown to me apart from several songs on Prog Magazine samplers. After Szyzygy they seem to be the most enthusiast advertiser in that magazine, resulting in sharing many songs. I never came to buying an album of them so stepped into the dark really. The last push came when talking to Josie in Portugal this morning. When I commented on the blast beyond Creation and Revocation gave last night and mentioned today's option, she convinced me to support South Americans and go to de Boerderij (she doesn't realize what she asked for as in the coming weeks at least 5 Brazilian and one Mexican band are scheduled to play the region). But getting slightly more to the point, I did go to see Aises and found a very good band on a rather small stage. The Boerderij mentioned Rush, Marillion, Camel and Porcupine Tree as references, four bands I like so what could go wrong. Well maybe the name-dropping went somewhat wrong as I could not hear much Porcupine Tree in it, nor lots of Rush or Marillion. Camel I heard and further all the great Prog bands of the early seventies were somehow blended in. This resulted in an audience of people who lived during the early seventies and I might have been below the average audience age for a change today. In order to match the disappointing turnout the full band was dressed in black playing before black curtains, where only a Jack Daniels label came through. The band was very good and highlights to me came in the many twin guitar solos or switching between the two. The rhythm section and keyboards were all doing the necessary and vocalist Sebastian surprised us during the song Club Hawaii. During one song one guitarist showed to have a great voice as well with more anger in it at times. As all the songs were new to me I did not recognize the material, but that did not hinder me the least. Opening with a 15 minute epic set the tone and basically the show never dropped from there. Aisles played two sets of both almost an hour and those who were present enjoyed themselves big time. I am now playing their last double album Hawaii and might have found a new South American band to follow. Good luck on the remainder of the tour.
Posted by erikprogtricolor at 21:08