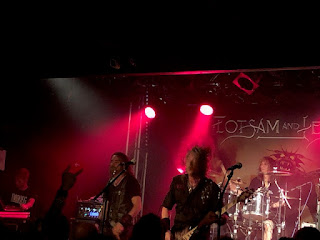 Flotsam and Jetsam have been returning quite often to Holland over the past years. The good news is that we don't get tired of them, but seem to appear in larger numbers each time. Two weeks ago they sold out Little Devil and tonight Baroeg looked packed. Not sure if it was sold out, but far too hot it became quickly. Suddenly those airco's in Musicon looked the best investment ever and that one week after the heatwave. But enough about the weather let's metal. Maybe the full house also had something to do with the very strong supporting double. Opening band were Dark Sky Choir a band I never heard of until recently. Not knowing the band says nothing about the members. The vocalist Brian Allen I recognized from a Vicious Rumours show at Alcatraz some 8 years ago. Guitarist Ira Black played in so many bands I like, but I last saw him with Am I Morbid. The bassist I did not recognize, but even played live with Queensryche and is in Disturbed. Finally the monster of the band was wearing a white tie on a black shirt and hit the drums. He even got a solo spot in the 30 minute set, which was surprisingly entertaining with him climbing his drums while playing. I read somewhere he plays in Exxplorer, but just picked up my copy of Symphonies of Steel and he is not in that line-up. The music you ask? Well with this line up you get what you expect US Power Metal with trashy edges at times. I loved their show and songs, so now I have last album End of Days playing and all is good. A band to follow and if they ever add a cover to a longer setlist, may it be one by Exxplorer. 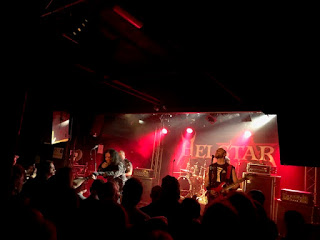 Second band of the day is an old favorite I did not see that often, Helstar. First time ever was when they supported Yngwie Malmsteen in Zwolle, somewhere late eighties. Second time was at the same Alcatraz festival I saw Brian Allen singing. Helstar is the band around James Rivera, one of metal's traditional vocalists who split opinions. Well I am in the fan-camp loving his high screams. That voice was still strong as we could hear from the beginning. The set visited the history with some more focus on the past (as we like it)  So soon the King was Dead, after which we should bow down to the King of Hell. Time was short, so the band rocked on. An instrumental break gave James the time to dress up. Coming back with a black cape and vampire teeth, we knew it was time for Baptized in Blood. Their one but best song, as they save the best for last. Run With the Pack! Pack! Pack! how I love shouting along with that one. This song alone increased temperatures another few degrees and it was a brilliant ending to a perfect set. 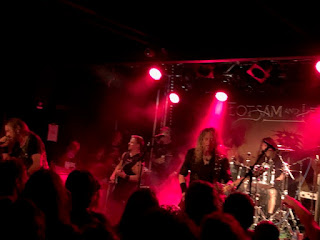 So after two very good openers it was up to Flotts to surpass this. Well they had no problems whatsoever as this probably was the best show I ever saw by them. Everything was right. The setlist, the full house an animated A.K. and the beers cold enough to keep us standing. Opening with new song Prisoner of Death all sounded good, although with the lights going on we doubted if they were sound-checking still. Well rumbling further into Desecrator the roof already almost came down. Following this by the best Iron Maiden song Maiden never wrote: Iron Maiden. If only Maiden would release an album with fast bangers like this again, it would be their best since at least Fear of the Dark, if not further back. Then back in time to Hammerhead from the debut and so the evening went on. Hans and I concluded rightly that Flotsam and Jetsam are so good live, as apart from their starting classics Doomsday and Disgrace, also their last albums are very good and relevant. I said it before, but the big four definitely did not release this century any albums as good as the so called smaller bands like F&J, Exodus, Death Angel, Heathen did. This evening was one perfect show by a band in top form and we know we will be back when they return soon. Not sure if that is valid for the too short set at Killfest for me though. What a great band Flotsam and Jetsam are, let's hope they keep on coming back every year.
Posted by erikprogtricolor at 11:00