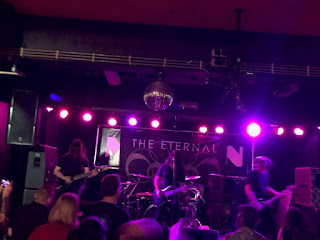 Saturday night, warm temperatures and no plan in live. Let's check out some unknown bands to me in an air-condioned Musicon. The Eternal are from Australia and play doom. I also heard some new wave like sounds and in general it was dark rock. They pack their music in long songs which have all the time to develop into something heavy and  sad at times. I listened once to bandcamp before deciding to go to Musicon and as usual live it came better together being heavier. Pretty good overall, but still more a band to see on stage than play often at home to me. 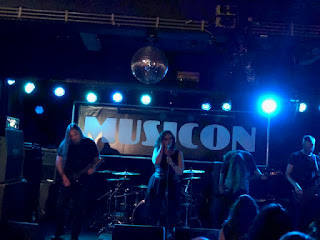 The evening was opened by the Dutch band with the impossible name Vetrar Daugurinn. Now Dutch bands with female vocals in general make me a bit scared as the vocalists tend to go operatic. This band has onen who sings and pretty good as well. I liked them best when they went slower and heavier. They play Dutch Doom Days in November and I think that even at Progpower they might appeal to many. A diverse enough set opening a nice evening in Musicon. Today the full houses of late were not met, but interesting enough some 75% of the audience I never saw before, which normally is the other way around. Now off to Luik for some Classic Rock.
Posted by erikprogtricolor at 09:26