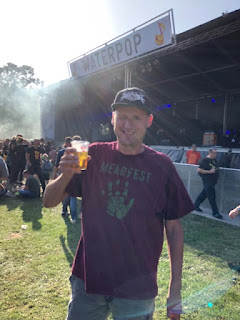 I knew that Channel Zero lost their drummer rather sudden, This morning due to a Metalfan post I learned this was today on the day six years ago. As a member of the Mearfest family I also did know this is Molly's weekend. So combining both, nothing seemed to be more appropriate than to go down by bicycle against the storm to Wateringen in my Mearfest shirt. Waterpop is the biggest festival in het Westland, the glasshouse region south of The Hague. In the eighties Westland was big in metal. Often we went to see national bands in venues in the region. Nowadays even Waterpop does not shy away to ignore metal as a genre, but this year Channel Zero was on, after a failed attempt one year ago. 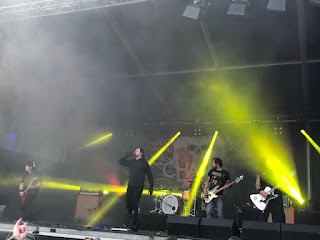 Channel Zero from Belgium starting some 30 years ago as a thrash metal band, moving to groove metal. Tonight they would give Waterpop by far the most energetic show of the day. Not too familiar with their CD's I liked their set, their songs and their Flemish introductions. During the last song the vocalist entered the pit and surprised some people at the field. So all in all a very entertaining set by what Waterpop called the best metal band of the Benelux. Further Waterpop is about seeing friends, have a drink and make sure you leave on time before a DJ starts annoying you out. So cheers and thoughts go to Channel Zero and Brian and Claire Mear.
Posted by erikprogtricolor at 22:59