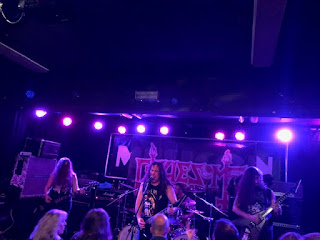 It's Tuesday 16 July and for the second time in one week Musicon is the beating heart of metal in Holland. Let's hope that this becomes the new trend. The evening kicked of even 15 minutes earlier as Gruesome informed they would not play 60 but 75 minutes. So Melting Eyes were on stage already when I walked in. Known faces from the region and a decent death metal band. I just warmed up and met with some friends , so did not fully undergo their already started set. Guess I will see them again soon. 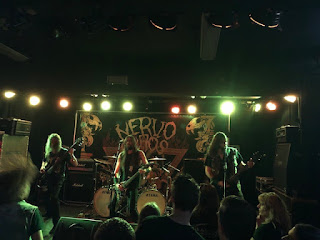 Next band were Nervochaos from Brazil. I did not know them before, but saw they brought 8(!) CD's along for sale. With Brazil being my past home-country I always make sure I can get a good impression of the band moving slightly more forward. Brazilians tend to be kind of musical by nature, so the playing is never an issue. In the case of Nervochaos it is packed in Death Metal. Starting with a slow instrumental arriving at fast banging songs. Arian told me I should write down that they played nice and tight, so here you go. Nice band who sorted themselves a place to stay already, so no B&B hosting for me this time. 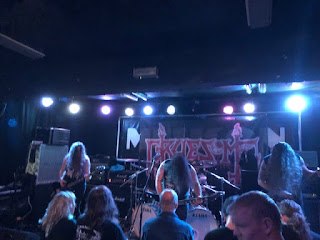 Gruesome was the band most really came to hear and I was curious to see if they could pull off their albums live on stage. Well even if hindered by some technical issues they could. Speaking about tight bands, what we got hitting us here was nothing short of impressive. They call themselves a Death coverband, as musically they are just the same. At the same time they play their own songs with one cover only (Born Death). Two full and one half album into their career I own 1.5 of it. So some songs I thought I recognized, although that is always hard in this style if you had not played the album many times recently. Actually that did not matter as listening fresh to their songs also works when played so tight with impressive guitars. The floor got more slippery by the song and the mood was good, so nothing to complain during yet another fine evening in Musicon. Well maybe the T-shirts. The print of the Twisted Prayers cover (Ed Repka) did not come over all too well on the T-shirt, so I passed in the end leaving me now with a feeling of not supporting the band. Well I was there and will be back when they return.
Posted by erikprogtricolor at 10:12