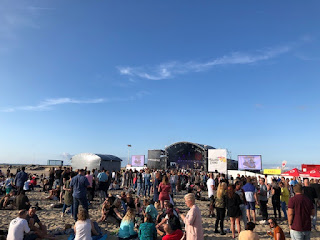 Schollenpop is one of the many festivals around in the summer. For those not from the The Hague area the order is as follows. Kaderock early June hits of the season. In and around Musicon this is musically the most interesting festival, as it builds around guitars and usually includes more than one metal related band as well. End June Parkpop is the biggest festival. In the eighties/nineties they would attract up to 400,000 people, which is less now. That festival you can forget about as they ignore metal and hard rock completely for years. Than Delft holds Westerpop and Leiden Werfpop in July and early August Schollenpop hits the beach, before Waterpop next week in Wateringen sort of closes the festival season in the region. In the past all these events were for free, nowadays some charge a fee and yesterday for the first time we had to pay 3 Euro to enter the beach part of the festival. Schollenpop is also traditionally guitar driven and had some good bands in the past. Of course 2015 is Classic with Death Angel on the main stage and THHMA having an all day metal stage as well. Ever since you feel sorry that this had no continuation after the huge success of that day. This year there were some unknown bands who I later heard were pretty good, but the band I came to see was Moonkings. I decided to go strategically only after 18:00 as an early start guarantees a drunk departure as you always run into friends and more friends. 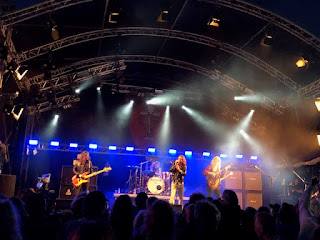 So after enjoying a sunny, not hot beach it was well past the scheduled starting time when Moonkings hit the main stage. This band is the new project of Adrian Vandenberg, Holland's most successful hard rock guitarist with his own band in the early eighties and later passing by Whitesnake. So for the style of music you can simply think late eighties Whitesnake. This is also made possible by the very strong voice of Jan Hoving. Bass and drums are handled by much younger guys who did so very well. Now I never bought the albums by Moonkings, so strangely enough I was welcoming some covers during this set. From Vandenberg we got Burning Heart and Whitesnake got a nice acoustic Sailing Ships, which next to the sea was probably their best setting ever. Judgement Day was a nice surprise and Here I go Again more obligatory. This actually is a pre-Adje Whitesnake song, but redone during the commercial years. After an own song they closed with the only disappointment of the evening. Covering Rock and Roll is so boring and cliche that you start disliking this in principle strong song. In the end we got a very professional show bringing us back to the eighties in style. Adje even told us he was born 3 minutes walking from this beach while I always thought he was a tukker. Next festival stop Waterpop. 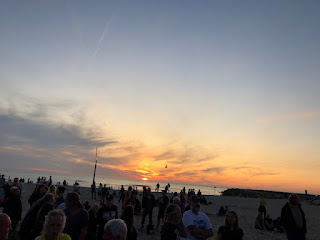