Another evening of Death Metal in Musicon. Incantation on their way back from Party-San and support Beheaded would give us something to bang our heads on. For me this weekend the cycling tour Pedal to the Metal starts, so why not open already on Friday. Turned out that we would not have a packed house, but it nicely filled up again. That is not bad given the competition of Into The Grave and Alcatrazz festivals this weekend. 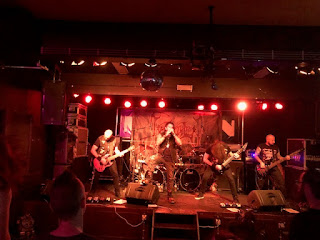 First band on were Beheaded from Malta, and I guess the first Maltese band I saw. Well they played mainly uptempo Death Metal. While the vocalist tried with wide open eyes to attract more people forward most watched from a distance and saw it was good. Incantation was another band I hold no music of. What I liked more about them was the mix between Death Metal and very heavy doomy passages. Vocalist does not like posers and the band played on, even on bass with one finger out. This set was tight and made you understand how these guys are thirty years around. A nice opening of my series of 5 metal nights it was and with the cycling coming up a modest beer consumption to match. 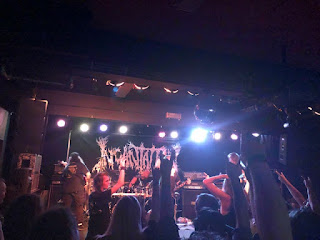