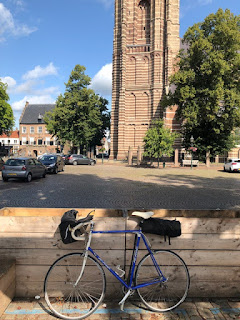 Pedal to the Metal!!. In a recent post I explained the reason behind my trip. While being in my head some time more or less, this tour all came together rather fast when shortly before my last Portugal trip I sort of fixed my bicycle. After I printed the shirt I realized that I could have included the shows in Musicon and Waterpop I attended 9 and 10 August as I visited both by bicycle as well. Anyway back on the saddle and did that hurt? Yes in a way it did. My total training kilometers must have been around 80 km combined over three days. Now I had to start with the longest stage from home to Tilburg, which including the road-detour and wrong roads taken should have been around 110 km. Never much in a hurry in life I took matters easy and arrived in Tilburg well in time and reasonably fit. After a Japanese dinner I could go to Little Devil. 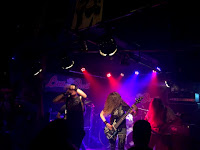 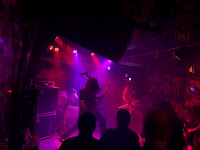 Tilburg; 11 August
To be honest I included this show for logistical reasons. Tilburg was nice on route, but without the cycling I probably would not have been here. I do like Krisiun and saw them before, but they fall in the category I travel for limited to the Leiden/The Hague/Rotterdam triangle. Last time I saw them they played the huge stage in de Nobel and now one of Holland's smaller stages. That did not matter much to them as they gave us a great set of death metal. with old and new songs. Opener of the evening were Dutch upcoming Death metal combo Sepiroth introducing their new vocalist. I expect to see them more often in the near future, good band for warming us up. 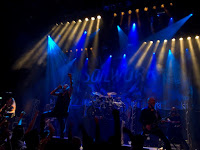 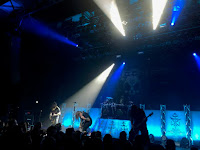 Eindhoven: 12 August
Cycling in the sunny morning I could recover from first small pains in neck, back and knees. only 40 km this was never going to be impossible. The evening had a show I would have gone to see anyway. Soilwork's 2019 release Verkligheten is one of the albums I played most this year. Their melo-death mixed with very accessible melodies makes this a highlight of the year to me.  Headliner was Hypocrisy a band I never saw before and hold a few CD's of. Soilwork did give us a pleasant hour of melo-death, where many new songs were included. My only comment would be that with one keyboard and two guitars on stage I did not get why almost all songs started with a tape. Closer Stälfägel was a party to me and certainly far too commercial for death metal purists. Headliner Hypocrisy is a machine of heavy brutality, but with a sense of great melodies. The not so full Effenaar on a Monday night midst festival season was treated on probably the same set as most festivals, but inside lack of wind and rain always improves sounds. Pleased to see Roswell 47 live once closing a nice evening in de Effenaar. By the way with rather good Verkligheten T-shirts on sale, I regretted not having much space on the bicycle for purchasing merch. 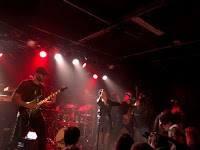 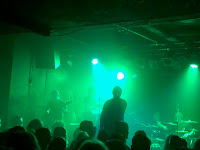 Nijmegen: 13 August
This morning weather forecast was similar, sunny morning, showers as from lunchtime. So another early rise and feeling stronger than the day before a pleasant ride through forests and farmlands. Arriving in Nijmegen I already decided I would train home Wednesday. This gave me the chance to lunch, dine and drink at ease. Another plus was the extra space for merch I created. This was just in time as this show I definitely wasn't going to miss. The Contortionist are my favorite Djent-band and Azusa gave us recently Heavy Yoke a killer album of math rock with a twist. So before Azusa started I made sure I found a good spot close to the stage to see what the hell would be going on. Even after playing Heavy Yoke repeatedly recently, I expected this music hard to recognize song by song. I was right at the opener until they later told us this was a new song. Actually without knowing song titles I did recognize all later on, which does help appreciating their music. References? well with a bassist having a past in The Dillinger Escape Plan and guitars and drums passing through Extol you can hardly expect easy listening. A second guitarist was added, but the surprise comes on vocals. I saw Eleni before with Sea+Air at Brainstorm festival. Well that band had absolutely nothing to do with Azusa. She does rule the stage with her aggressive screams, blended with sweet vocals through another mic reminding me of This Mortal Coil (You and your sister). The interesting part is that when she decides to go soft and sweet the band does not necessarily follow and blast beats might guide her through. I already loved the album, now have another live favorite. This band should get more exposure and I know just the festival in Baarlo where half the audience would totally love them (and the other half not getting the point). Definitely highlight of the week to me and hope they can come back soon. Shall proudly wear their Tee. And than The Contortionist still had to follow this up. Well they could as obviously they gained lots of touring experience over the years. Last time I saw them was in the bar stage of Patronaat, so it was good to see now Merleyn sold out. Through the years they are mellowing out, but the set had many dynamics to the heavier bits. Language I and II remain highlights and actually all was good, although a bit short. A band going their own way this time brought light pink band shirts and played Whitney Houston as intro-tape. To my surprise many people liked this intro, so I must be inflexible here. 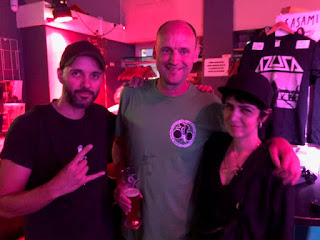 What an evening to close my short trip. My health was keeping up fine although cynically enough the rather new shoes I wore at shows gave me a big blister on the heel. Tiago left home Sunday for Leiden and seems to be settled already. Hoping he keeps on spending weekends in The Hague. Again this year I missed out on more day festivals, but this row of five evenings was a success. Next year I might repeat this cycling, joining friends at a festival I choose. I was lucky with the weather, the lack of flat tires, the shows and the food. Sometimes you get what you deserve.
Posted by erikprogtricolor at 17:26