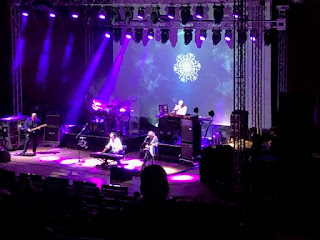 Marillion celebrated 5 weekends this year and we opted to join the last one in my new semi hometown of Lisboa. In the past we attended the two Minehead conventions and I believe I was at four of the Port Zeelande events. Now Marillion weekends  are something special and completely different. That is where I have to explain first. For me this was not a proper Marillion weekend as changes in work and housing situation made me not prepare anything and so it came to be that we found out Sunday at 18:00 that we missed two afternoons with live music and drinks specially organized by The Web Portugal. We in this case means Yvon, Rene and I as Jeroen jumped ship later on and Josie was not too keen to step in with her head at moving. Now Marillion weekends are probably the most positive experiences you can find on earth, so let me start being a grumpy old man. Aula Magna what the fuck? One bar for 1500 thirsty visitors just ain't enough. If than the tap breaks down and wine runs out, people need to be won over again by the whole atmosphere. Talking about atmosphere the seats only is for me also not preferred, but you can't win them all. On Saturday some extra's were provided and Sunday we finally had beer whenever wanted, so that needed to be put on a picture as well. Talking about pictures we did join the group picture behind the building, but I did not find any posting of it yet. So in some ways Marillion started an uphill battle, but they turned out to have no problems with that. 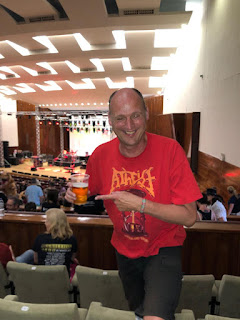 Friday
The first night would give us an overview of the first four Hogarth singing albums. As all four of them are strong albums not much could go wrong really. Of course anyone might have his own favorites, but this evening was sheer brilliance. OK Brave went on soft and moody and skipped the best song the Great Escape, but so what. Afraid of Sunlight on the other hand focused on the uptempo and rocking songs. Overall this turned out to be the best night for me. In the end not drinking is not so bad and we had a few in the garden at home to evaluate a good start. 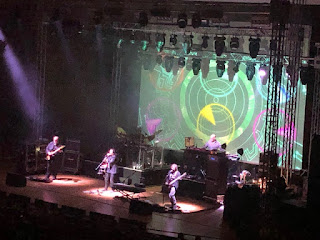 Saturday
On this evening the next series of albums would be presented and I was curious. Highlight of the weekend was presented this evening when Pete's bass solo opened the last encore This Strange Engine. Yes I am also in the team of fans who come mainly to Marillion shows to see Rothery on guitars, so this spontaneous opener was very welcome. Makes you remember that all five are excellent musicians really. The set contained for me some nice surprises (21st century, Separated Out) and some songs that are not my favorites really (Enlightened, Fruit of the Wild Rose). Overall a very nice Saturday with even my first beer at the start.Talking about starts this evening was warmed up by Tiago Barbosa and his band, which turned out to be a nice surprise for an empty hall. Don't think I recognized any Forgotten Suns songs though. 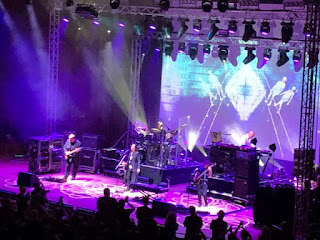 Sunday
By now everybody was sunburned and we would get a full album evening. This needs explaining again. Marillion does not do bad albums. Still they are not at a constant peak either and if I have to name albums I never play anymore it would be: Happiness is the Road, Somewhere Else and dot Com. Now the Sunday would have the first in full and a heavy section of the second one. As I had several friends attending port Zeelande I knew this and decided to not play both albums and see what the "o yes that one" factor would add to the show. Well I am afraid I made the wrong choice as at times I really had no clue what soft song was being played. So the evening passed by calmly, when suddenly The Sky Above the Rain did sent me back to heavenly skies again. Hooks in You rocked the Hall and when a Fish era song is played the audience always gets that bit louder. As far as my Scottish goes Slainthe Math is about drinking so a comment on the bars or lack thereof was expected. And then the Leavers were One Tonight and it was all over. A huge thanks to the Web Portugal and the Marillion organization is in place and I will think on 2021 weekends with a return to PZ seeming most likely.
Posted by erikprogtricolor at 16:38