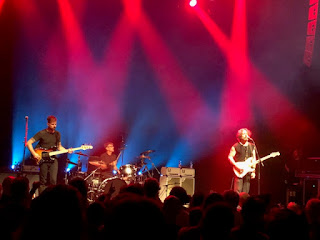 Richie Kotzen in het Paard, Known from Poison, Mr. Big and the Winery Dogs. Tonight would be an evening of bluesy hardrock for music lovers. No support, one trio of top musicians and lots of guitar solo's. Hans was interested in joining, but decided to save voice, money, liver and energy for Graspop coming weekend. Upon arrival I did run into Micha with his son. Now I used to see Micha in the Oldtimer pub some 30-25 years ago where he used to play Richie Samboro's solo album stranger in this town quite often. Tonight was not that far from that album I thought. add some Paul Rodgers, some Gary Moore and a funky bass. I do not have any of Richie Kotzen's albums, so recognizing songs was not for me. This was just a Tuesday evening of good music joined by a few hundred people in het Paard. Impressive voice he has as well. 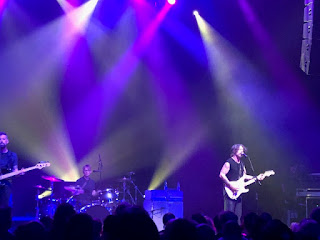