Time to highlight some CD's again. I did run into three of them by tips, so I guess more of us might have missed them. All of them need soem time investment in them, but yo will be rewarded. 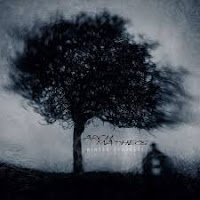 Arch Matheos - Winter Ethereal
Where other albums were tipped to me no-one needs to advice me on a new release of Arch Matheos ever since a friend of Hans during a local metal gig in Delft 1984 told us we should check out Night on Bröcken. So this one was pre-ordered including the cool Tee and hopes were high. The good thing about high hopes is that if all works out fine you still might get surprised. That is what happened here as I believe we have a candidate for album of the year here (but the year is not halfway yet, so be patient) Opener Vermilion Moons has already anything you love about this duo. The strong high voice of John Arch and the great guitars of Jim Matheos, with a haunting break towards the end. Albums with John Arch always have a lot of lyrics and a voice that never goes down. So repeat listening is required. This album mixes various styles without losing their typical sound. So we have a ballad in Tethered, followed by shortest and fastest song Straight and Narrow. With the current success of HBO series Chernobyl, it would be nice if Pitch Black Prism about the same accident would become a hit, but that won't happen as it is musically too good for the masses. Final song Kindred Spirits is the 13 minute epic and after that one is finished you can only push repeat really. Winter Ethereal, my summer album of 2019. 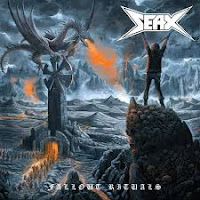 Seax - Fallout Rituals
This one I read about and saw passing by on the Shadow Kingdom mailing. Yet it took Theo to highlight it before I went to their bandcamp page.  Listening is ordering. That is if you like your metal being eighties speed metal this one is obligatory. Fast, fast and fast songs. So some time is needed to recognized songs as such, but damn this sounds great really. It seems to be their fourth album, but a new band to me. They might fit in well on an old school festival and I hope to see this live one day. Sore necks guaranteed and sore throats if you like to scream along as well. 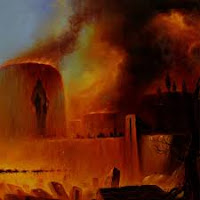 Pervy Perkin - Comedia: Inferno
This week Andy's blog Something For the Weekend released issue number 200. During the years I picked up on several new bands, but this is definitely one of the heavier ones on that blog. These Spaniards play anything Death Metal with lots of forward thinking music blended in. Hard to describe really, especially due to the variation in between songs and even within some. There are grunts, but also Leprous like moments with strong clean vocals. Only comment by an old man would be that the colourful font-changing letters in the booklet make it impossible for me to read along with the lyrics. They could be interesting as this adventure is based upon Dante's Divine Comedy. The most complicated album of recent purchases, but an interesting ride it is. 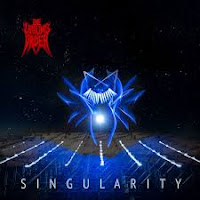 De Lirium's Order - Singularity
To close with a Tech Death album tipped by Jonathan. He was taken by the use of Harmonica on a Tech-Death album. Agreed that is unusual, but my main attraction is the occasional change to very strong power metal. While the instrumental opener and first song Ayatollah still sound like straight Technical Death Metal the following title track introduces very strong clean vocals and a style break to Power Metal that works very well for me. The whole album even on its death metal parts sounds accessible and the harmonica does add flavor indeed. Was it a part of La Vie en Rose I heard during Piazzola? Anyway where  I thought that Contrarian released the best Technical Death Metal album of 2019 De Lirium's Order from Finland might run for the same title. Bring this live to Holland please.
Posted by erikprogtricolor at 12:06