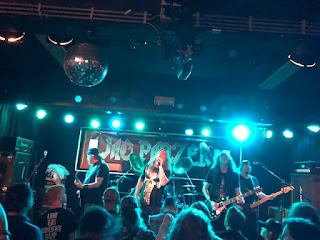 Jag Panzer are among those bands who put US Power Metal on the map. Their Classic album is Ample Destruction, one of those examples that aged very well still sounding relevant. So when they were announced to play my home venue it was sure we would be there. A Wednesday is not ideal for all, but Hans, Magchiel and Pieter joined me for some classic metal. 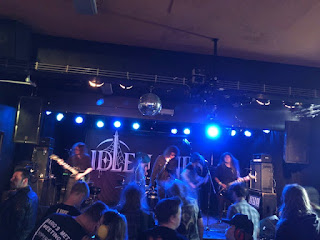 Opening band were also from the USA Idle Hands. This band was announced as blending the Cure with Heavy Metal and that is just what they did. For me this set went a bit with mixed emotions. At times strong songs passed by (Bring me the Night) while at other moments my attention dropped a bit. Most of these downs came I guess by the somewhat too cool presentation of their vocalist. Dressed in black wearing sunglasses he looked not all too happy on stage. It does fit their music, but at the same time does not pass much of a vibe to an audience. Overall Idle Hands sounded pretty OK, but did not make me rush to their merch stand. 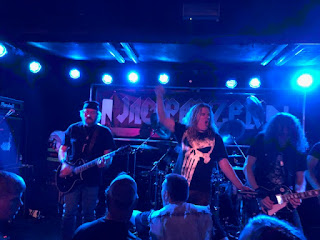 With Musicon's setup their was a short sound check which made me for a moment think they opened the evening with Symphony of Terror. That was cut of halfway, but it made clear we would be in for a treat this evening. This was for me the first time I would see Jag Panzer and let's face it nothing really beats good old Heavy Metal. Opening with a new song Magchiel detected some voice issues with Henry the Tyrant Conklin. Interesting enough he later informed us he was having a cold after delivering a simply amazing performance during Licensed to Kill. While Joey Tafolla does play again with the band he did not join them on this tour. Well with all respect to the man he was not missed as the two guitars were awesome tonight. The set passed the full history with a bit more songs from AD. Technical problems were overcome easily and we got for me the best show in Musicon this year. If there were highlights it must have been during the encore when we got the chance to shout along with Warfare and No Mercy!. A perfect evening by a great band. I would have loved to hear more of their touring stories over breakfast, but unfortunately their tour manager last minute decided differently making it necessary that Tiago will have to eat many eggs and drink lots of fresh orange juice before going on holidays next Sunday.
Posted by erikprogtricolor at 11:26