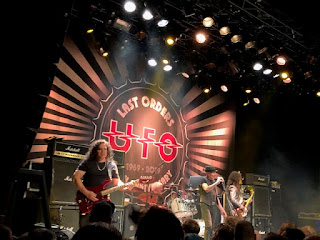 Last Orders a proper name for the last tour of UFO, celebrating 50 years of existence as well. Several weeks ago the music world was shocked by the passing away of Paul Raymond. Their was a short silence after that by the band, but a few weeks later Neil Carter was announced as replacement in order to have the tour continuing. This Tuesday evening a farewell to Holland would take place in de Boerderij. The venue seemed full and we were ready for one last time classic hits from the best live album ever: Strangers in the Night. Before UFO came on we got Nine Eyes Nation opening the evening. A nice enthusiastic presentation, but as unknown support asking the audience every song to clap, stump or sing along seemed overdoing it all a bit to me. Decent play but no songs that stayed in my head. Yet part of the typical Classic Rock audience seemed to like them enough. 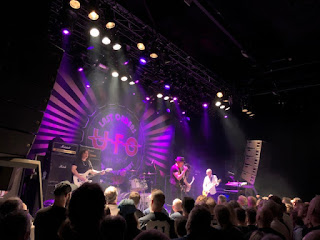 A break and the bell ringing announced last orders. Opening with Mother Mary and all probably were amazed how good Phil Mogg's voice still is. We Belong to the Night followed and we were in for one evening of classic UFO. The set would more or less alternate between songs from the SitN era and later ones, And yes than we get songs like Lights Out, Only You can Rock Me or Love to Love. Phill Mogg reacting to the audience with a dry sense of humor and Vinnie Moore is not only a very good guitarist he seems happy and friendly on stage all the time. The never ending guitar solo in Rock Bottom he adapted to his own style, which makes sense as a pure copy of Schenker's solo you can see at Michael Schenker Fest. And ten it was over, but an encore was obvious. Doctor, Doctor still was to come and after that even Shoot Shoot closed the evening. I do hope that UFO does not start an everlasting farewell tour now (Scorpions style) and calls it quits. Not that the quality is going down, but it has been nice and I do not think another farewell would add more to the rich history of this band, that should have been even bigger.
Posted by erikprogtricolor at 17:42