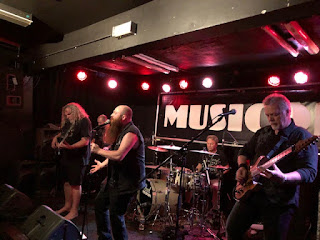 Let me start with a spoiler alert. This will be a very biased review. Heir Apparent are one of the top bands from my early twenties. When FB asked people last year to mention ten favorite albums of all time I did not do so, yet used the current to post a world cup selection of 16 favorites (which is still too low a number). Graceful Inheritance did make it to my team. Actually One Small Voice could have as well, but I limited to one LP per band. Then suddenly there was last year the release of The View From Below and that became to be my favorite album of the year. By posting my list I got in contact with Terry (Guitarist) and one thing led to another and before I knew it Heir Apparent would come back to Holland after 33 years, playing my home venue and staying at my place. Things could not really get any better and my hopes for this show were as high as a very high thing.Picking the band up at the central station where they arrived directly from Rock Hard Festival. A short stop at home to drop luggage and have a pastel de Belem and off to Musicon. The sound-check alone showed me that we would be in for a treat indeed. 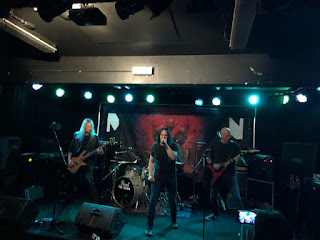 Opening band this Monday afternoon were Sad Iron. They contacted Musicon to see if they could open and I could see the match. Sad Iron are also from the eighties and play a slightly faster speed metal. They released a new album Chapter II The Deal (now playing) only this April and a new formation would be shown in Musicon. Sad Iron did play The Hague several times before and the most legendary show was at the beach during Schollenpop. Result is that several people know the band and how they play to kill. Considering this was the second show only in current formation I must say to my untrained ears no flaws in their songs. A tight set, speeding up mostly doing exactly what they came for, warming us up for the headliner. 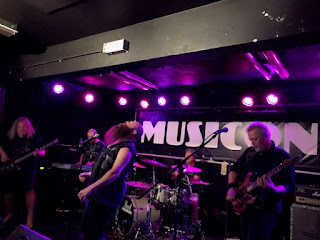 Hereafter tension rose, well for me it did. Would Heir Apparent be able to meet my high hopes. Well that was sorted when opener The Servant was finished. What a great live band they are. All instruments clearly heard and mastered by the best, with Will Shaw showing us he is definitely one of the best voices around in Metal today.  Before the show kicked of a clearly impressed Will dedicated this show to one of his inspirations André Matos who sadly passed away the day before. In advance of their trip to Holland the band promised a long set and that is exactly what we got. The View From Below was played in full throughout the set. As this are only 8 songs we did get lots from both old albums as well. Mentioning highlights became impossible to me, as both old and new songs were performed so good that we never had a drop in the mood. How great is it being able to shout along We the People or Hands of Destiny. Or if preferred Crossing the Border or Another Candle. This was one great high and I had the idea that everybody in Musicon this late afternoon highly enjoyed themselves. 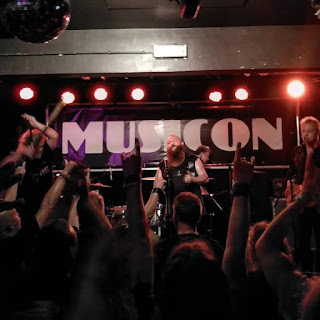 Should I make a comment on the number of people not being there? not really. Only point is that while watching this show I had this recurring thought that so many people would have loved it as well, but missed out. Terry was right when promoting this gig as the best band you never saw. Well their bad, as I can only thank Heir Apparent for making the long train rides only to play for us.  As I told them after the show I can only not yet confirm best gig of the year, as I have high hopes for Psychotic Waltz at ProgPower this year. For those missing out, the good news is they will return to Holland soon. 28 July they play Little Devil. Now I am trying to find a strategy of convincing Josie we should cancel our booked holidays and I will go there. As that is not a good plan I have my eyes set on Up the Hammers Festival in Greece next year. Probably deciding soon I should be there. For now I am happy and realize I watched a show I won't forget quickly. Tonight I will proudly wear my new HA-Tee (Thanks Jennifer) during UFO's last orders tour. Tear Down the Walls!!! 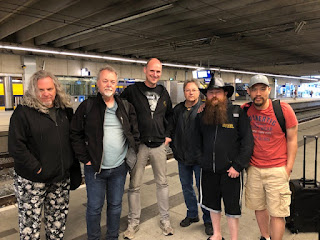