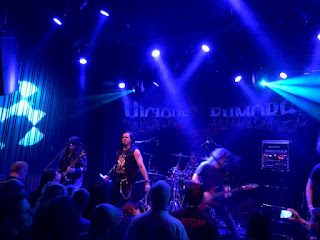 34 years ago Magchiel and I were blown away by Soldiers of the Night. So when Vicious Rumors was to play Leiden we decided to go see what they are like today. Well that did not disappoint, but first we had to pass through some supports. 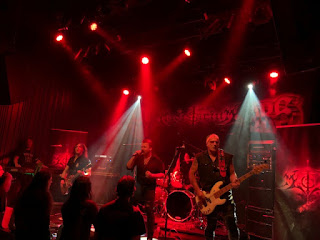 That might have sounded rather negative, but the supports were actually warming us up fine. Magistarium from Germany were musically quite OK. The vocalist did require a certain taste and as I am no fan of operatic females in metal, the same goes for men. So the music was good but the voice not my thing. What we remember is the bassist handing out shots to the audience and the cover of Brexit hymn I Want Out. Magchiel was happy at the start, but did not manage to shout along as Magistarium played or sung the song in Russian. 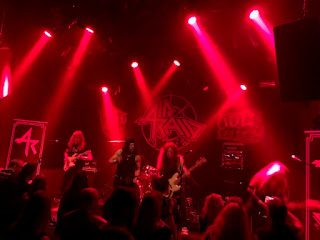 Next band were Air Raid from Sweden. The level went up a notch and their songs and playing were good. I had seen this band before, but could not recall where.  Good old Heavy metal with two guitars soloing in turns and mainly fast songs. As the evening was about the covers for the supports their version of Rising Force made us happy. Nothing wrong with Air Raid, so they might return for a headlining set one day. 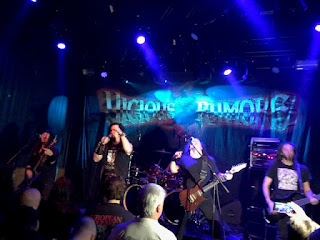 A long intro announced the arrival of Vicious Rumors. Now Magchiel and I got hooked by Soldiers of the Night, but their other Classic is of course Digital Dictator. As that album is 30 years old this year, we got treated on the full album at the start of the evening. Plenty of options to lose your voice shouting along Dictator or Minute to Kill. And then we were only 10 minutes into their set. After the final tones of Out of the Shadow we were properly welcomed and a small overview of their other albums followed. Highlights hard to point out as all sounded pretty good. Well maybe Abandoned as this has such a nice hook in Abandoned again, I thought that you were my friend. And then came the end with a break and a return and to our surprise Vicious Rumors decided not to play Soldiers of the Night. This in spite of several people singing to them they were SotN. A downer? not really as we just had a very pleasant evening of Heavy Metal. My downer came only later on when Josie arrived at Schiphol with a 2.5 hour delay due to Kerosene shortages in Portugal. So I was almost sober again, when she finally hit the ground in Holland. A good evening that Rocked Like Hell.
Posted by erikprogtricolor at 13:38