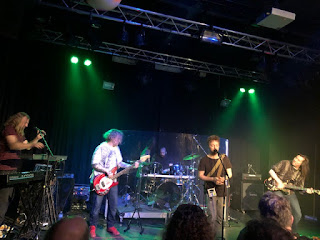 Overhead went a bit under my radar the last years. This Sunday they played 't Blok in the afternoon, so I checked out their last album on Progstreaming.nl. Well that was a pleasant surprise so I also went back to their only CD I have And We're Not Here After All and my decision was made. Overhead play progressive rock, but although with long songs accessible and close to Classic Rock at times. On the first official warm day of the year we could get a ticket and drink and wait outside for the band to kick off. Yvon joined me today and even gave me the suitable teaspoons for my HM B&B, so bring on the next band. There would be no support, so in order to stretch the afternoon a bit, the set was split in two parts I believe both a bit over 45 minutes. So resuming the show it was as good as hoped for on the song front. The band seemed to be four sympathetic guys and one pretty sick drummer. No slang sick, but actually sick with a red nose and suffering, so how well did he do given the circumstances. The set was a mix of old and new songs and I did get their last album Haydenspark on CD during the break.  So it was a pleasant afternoon in 't Blok indeed and the organization delivered their usual snacks during the show, which is an extra for all. 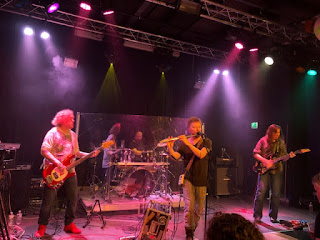 Yet there were two rather huge elephants in 't Blok as well. And somehow we all decided to avoid them and not speak out. During the first half it seemed that the vocalist just had too many tools and effects to play with. This resulted in his real voice at times almost disappearing and second voice as well as echos coming through much louder. After the break he came back louder and clearer. The biggest elephant remained for the guitarist though. He simply was far too soft in the mix. To such an extend that you had to concentrate to hear him even during his many solo spots. During the title track of the last album his full out guitar solo volume wise even lost against a flute. So his rock poses were there, but his sound was not. I thought he realized this himself as well when he kneeled before his amp while playing. Yet in the end in spite of the sound issues (new to me at 't Blok) Overhead did show us that they have the songs, the playing and presentation to enjoy us on stage. Waiting for a return with a revenge soundwise.
Posted by erikprogtricolor at 20:45