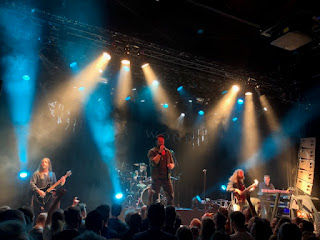 Seventh Wonder in de Boerderij on the day of Wonder. And no I am not referring to Easter as I am not into religions. The first wonder this Sunday was Mathieu van der Poel winning the Amstel Gold Race. Not sure how many of my three readers are into cycling, but this amazing victory was in theory impossible. But back to Seventh Wonder the Swedish Progmetal band. Let me first put some ballpark on where I stand regarding Seventh Wonder. I am not their biggest fan in Holland, as my name is not Esther or Michel. I saw them first live at Headway some 12 years ago and then got into their second album Waiting in the Wings. At the time the band was a bit more metal I think and their vocalist  was sick as a dog but still surviving on stage. Now that same vocalist is also the reason it was pretty busy in de Boerderij, as his day job is with Kamelot. At least when I ran into Mario before the show (whom I normally only see at shows by bands like UFO, Uriah Heep or Deep Purple) he explained knowing the band through Kamelot. From the ProgPower Europe side there would obviously also some known faces, as they played there before. Actually I only recall the spacy outfits from that gig, as they had little to do with the set I thought. So with Hans, Peter and Lida joining we gathered near our usual bar on the left and first waited for Max Pie. 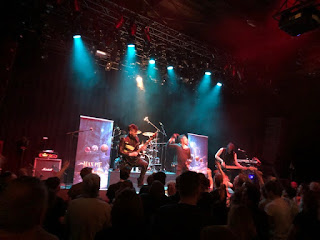 Max Pie are a Belgian Progressive Power Metal band. Yes they could play and the vocalist could sing. Actually he came close to Geoff Tate at times. Still something was missing to me. At first a tape was almost overruling the band, with Keyboards not being played but heard loudly. Second their songs did not have a sticking factor at first hearing to me. Maybe it was mostly because I got distracted. Just before leaving home I did read the Grimsby Town match report by Andrew. He is my main man in observing illogical attributes on stage, which results in endless discussion between us (Russian hat at Nightingale, Black flag waving at Soen anyone?) On comes Max Pie's guitarist in his leather jacket with yellow reflecting stripes and a huge leather patch on his shoulder looking like a rejected futuristic cop outfit, while the huge purse on his hip looked like he was selling train tickets, so I got confused. Luckily his solo's were good enough. But in the end Max Pie did not convince me, while Hans got a CD to listen closer at home. 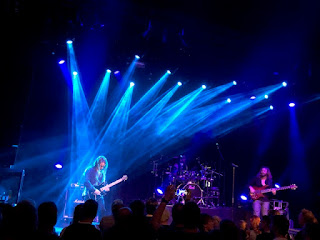 Seventh Wonder coming on, showed that we were moving up one or two levels in Progmetal land. Solid performance and confident stage walking. When they continued with two songs I know in Mercy Falls and Alley Cat I already saw, that this was going to be more to my liking than their PPE performance. Several times Tommy K asked us to sing along, but not knowing any of their lyrics I could not join in. Now Lida likes all Tommy's in metal, while we are always a bit afraid that Tommy gets too cheesy. I think he just got away with it this evening. My attention mostly went to the guys on guitar and bass. Interesting how the six string bass was very present all the time, but his short solo spot was not really that interesting (unlike anything else he played). After some 90 minutes Seventh Wonder was done and most people seemed pleased with their set. We had some evaluation beers in the bar and also agreed that while Seventh Wonder have been away for some time (8 years), their return is welcome.
Posted by erikprogtricolor at 10:54