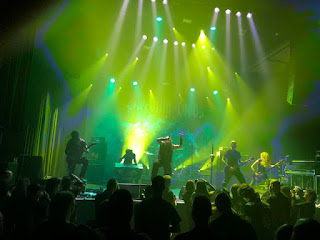 Being from The Hague and loving my metal, made this a pretty obvious stop. Now  many people might have excuses for being absent, like the beautiful weather making beach an alternative option.or family obligations over long Easter weekend. My reason not to go was Josie being over, but as always there would be a gap in the day before dinner , where I could do my part in supporting the local scene and pick up a bit of the atmosphere. So no full out report of the day, just some notes on bands I did see. Also I had to check if Rene's flyering was going well, attracting possibly a few more people to Heir Apparent 10 June in Musicon. Well his major discovery was that there are actually metal heads living in nearby Zoetermeer who never heard of Musicon whatsoever. So that mission was accomplished. 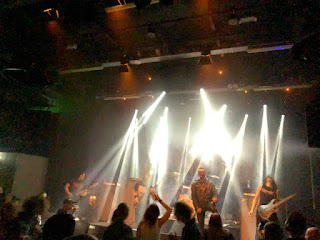 So how did I fare? Well Bleeding Gods were my first reason to be there as I missed them during Metal Experience Fest. This was one great opener as their show impressed. At times you are in Dimmu Borgir waters and then some death metal lurks around the corner but most outstanding of all was their overall show. Nice touch in the returning The Hague colours (Yellow Green) during their lightshow. Second band played in the small hall and Carnation from Belgium I last saw on the beach during Schollenpop. Good band with a red headed vocalist. 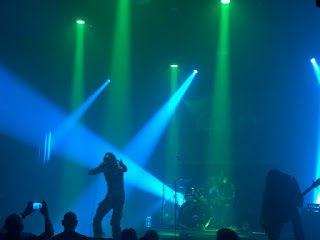 Then Spanish Black Metallers Noctem found themselves starting in a fairly empty large hall. Slowly they got me into their set as well ending well. Only distraction to me was that one of their songs to me had the same melody line as Bonnie St Claire's Dokter Bernard. Now I did not hear anyone else who agreed with me, but it made matters much less extreme to me. So after saying hello to friends in between these sets it was a bit of Italian thrash metal band Ultra Violence, before I cycled home. The small part I attended seemed good and a well organized festival, which shall return next year. Similar to last year my comment would be going wider in metal styles. It was now a bit much extreme orientated, so why not have a big Heavy Metal act on the line up as well. we shall see in 2020. 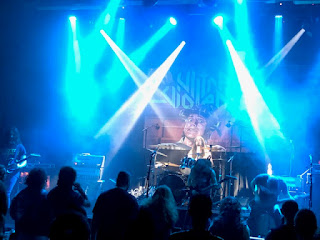