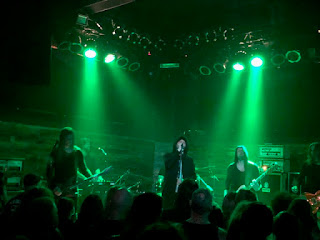 Swallow the Sun and Oceans of Slumber touring Europe. One of the most exciting packages this spring for me. Swallow the Sun recently released When a Shadow is Forced Into the Light, probably the album I played most this year as this is one Masterpiece of Sadness. Oceans of Slumber I am kind of  a fanboy ever since their debut album  Aetherial made it to album of the year for me. Strange enough this package decided to skip Holland, so going abroad was the option.Now this tour will play Lisbon next week and it is school holidays, so I could be there with Josie. However Tiago being one week before his final school exams, made it not wise to leave him alone taking care of food, cooking and shopping as well. The next best alternative would be Rockpalast in Bochum. While no one felt like joining me I decided to drive down to Germany alone. Big mistake as apparently holidays started in some parts of Holland and where Google told me I would arrive around 15:00 in my hotel in reality I did so at 16:45. Main problem with that was that I missed my city center tour including some CD shops. Now it was getting some food and down to Rockpalast. 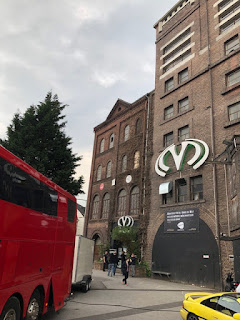 What an interesting venue this was. A labyrinth of stairs and spaces with bars at unexpected places popping up and a venue which gave everyone from any corner the chance to have a good view of the stage. Upon arrival the first thing to do is ordering a Weiss Bier under the motto when in Rome. Fair prices and good bars were another plus. I arrived around 19:45 in the venue in order to see Aeonian Sorrow already being well halfway their set. My ticket said start at 20:00, but then again my ticket also told me I was going to see Swollow the Sun. What I did see was Ok and not very far apart from Oceans of Slumbers style, with a less interesting female vocalist. To short to give many comments though. 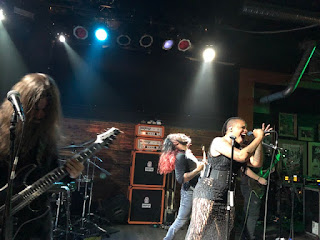 After a short change over at the stage I decided to move  forward to feel the new Oceans of Slumber not only on the ears but also through the airwaves. I say new Oceans of Slumber as drummer Dobber is the only remaining original member and vocalist Cammie is the only one still there from the Winter line-up. So where during the first show I saw by them I could still shout for Coffins Like Kites, probably their best song ever, that shout would now be lost upon a band surely not having rehearsed same. Actually after starting with one song from Winter we only got songs from their last year's The Banished Heart. Now I know their songs and loved what I heard, yet for those not knowing the band I can imagine this to be a difficult set. Oceans of Slumber play long songs and most have calmer intro's or intermezzos. So when halfway the Banished Heart title track there is a stop, we did get an applause for end of song. This while the final bit is to me the highlight of the album. The slow building dramatic parts where Most real love is died for to be yours is a beautiful piece of music and was brought emotionally by the band. Cammie's presentation is somewhat introvert with no inter song banter all around, but that just fits the music better I guess. From what I could hear and see further this new band will glue together more and more and shall maintain the high level of the band intact. The best was kept for last when At Dawn was the heaviest banger of the set and No Color, No Light was sung by Cammie alone and is another beautiful power ballad to end with. I say she sang alone as on the album Tommy Evergrey/Redemption is singing this duet. So I silently hoped for Oceans of Slumber to be the final band on ProgPower this year and Tommy singing along as he shall be around with Redemption anyway. When asking the keyboard player afterward he was blatantly unaware of this possibbility, so I guess that is not an option or he is a very good actor not allowed to say anything yet. At the end of the set the audience showed their appreciation and many would have loved another song (Coffins Like Kites for instance) 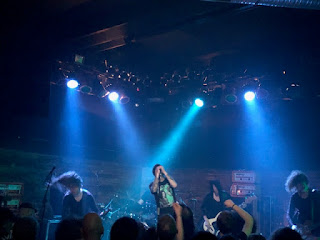 Another break so Zwei Weissen Bieren. My German is a bit rusty or as Tiago calls it non-existent. Anyway I managed to get what I wanted and already got some beautiful Swallow the Sun Merch. Now I moved downstairs and decided to stand before the sound and light men. This to have the best possible sound as I was interested how Swallow the Sun would be live. I love their last album and their previous triple CD Songs From the North I, II & III was a Masterpiece. I am a late entrance in their fan base as I discovered them only halfway their career with the album New Moon. The band opened with the title track of the last album followed by a song from SFtN. Hereafter Firelights followed and I realized we were in for one special evening. So I do love the last album, but live these songs came over even much stronger. The overall sound was very good with all instruments and voices clearly separated. This band knows how to set an atmosphere where you get drown into their sad songs with body and soul. The story of loss behind their last album is sad, but Swallow the Sun always were fishing in darker waters. When they announce old song New Moon and start with "Tomorrow will be worse, I heard her say, as she closed the curtains and walked away". this is sheer poetry resulting in goosebumps. The remaining set visited several albums while I was pleased that Stone Wings was included. After a wonderful set where the hall often became a wave of slow banging heads the band returned for an encore. The opening song of New Moon "These Woods Breathe Evil"was another highlight and I might have seen one of the best shows of the year. If they do come to Holland later this year I will try to be there as well. At least Mary and Lida should join me as a vocalist wearing a Peter Steele T-shirt is for them reason enough. 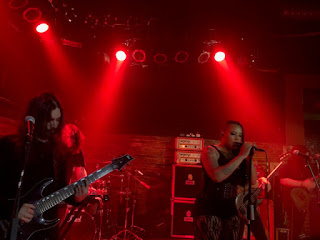 So I could return with a smile on my face to my hotel. Two bands who recently released such dark and sad albums giving us an exciting evening like this is just amazing. The venue also put itself on my radar although next time I shall look better if there is a hotel on walking distance available. If so I can enjoy the after party in the Dungeons as well. While all ended well I did get a German souvenir this morning leaving Bochum. On a road heading to the highway where you are easily driving 70, but only allowed 50 it suddenly turned 30 with me noticing too late. Flash it was so let's see if this prime example of the famous German sense of humor arrives in Holland any day soon.
Posted by erikprogtricolor at 13:50