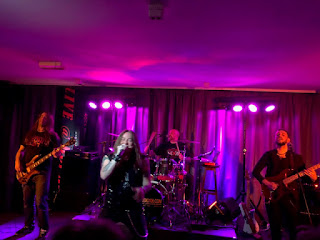 Mark Boals is a man of a thousand projects, so anyone into hard rock probably has some albums where he is singing on at home. I for instance played the Frontiers project The Codex in the afternoon to get in the mood.  For this tour the announcement was that he would play Yngwie Malmsteen's album Trilogy in full. Now that is probably my favorite album of YM and as he told us the first album he ever sung on. Cafe Bel Air on Breda was for me a new venue and that was a first success. Walking distance from the train station and great plans to grow their hard rock agenda, might make this one to return to. Next shows of interest announced: 22 May DGM /Tomorrow's Eve (but I shall be at Jag Panzer in Musicon) 16 June Vinnie Appice 30 June Praying Mantis. Breda is a 15 minute shorter train ride than often visited Tilburg so pretty easy. When Frank did text me on the train that he had free upgrades for first class we drove down in comfort respecting the two minutes silence when the train stopped for national commemoration of the dead. 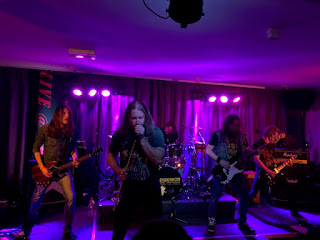 The opening band of the day were Harbour of Souls from Zeeland. I believe I was supposed to see them last year in their hometown when they were opening for Dead Lord and Horisont, but they were off the bill suddenly. Now I could see them and they play hard rock of the late seventies. Two guitars decent vocals and solid rhythm section made this a pleasant warm-up. Their covers were by Riot and Saxon to hint a bit of a direction. I was originally planning to get their two EP's in support, but never made it past the bar in the break. 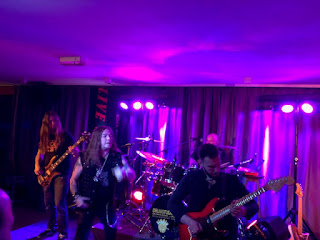 During the break we noticed that most travelers for the evening came from the greater The Hague region so I could promote Heir Apparent 10 June in Musicon a bit. Now Mark Boals was going to cover Yngwie Malmsteen tonight so that puts some stress on the guitarist. Like Dio cover bands need an amazing vocalist Yngwie is not for everyone to cover. In comes Emiliano something from Italy who was dressed in a black suit, but nevertheless shredded like a madman. Amazing playing and seemingly much less of a star than the original Malmsteen. So before the show starts let me explain my link with Malmsteen. I loved the LP's by Steeler (with Ron Keel) and Alcatrazz he played on, so when he released his debut solo album I was a fan already. His first four albums are classics to me and probably Trilogy is my favorite of them. Hereafter his albums became less urgent purchases. This phenomenon was normal in the eighties see Manowar or Metallica, no one needs to hear anything after the first four albums. Even for my huge heroes Dio, Queensryche and Schenker this is the truth to a certain extend. Malmsteen live than. We saw him in Zwolle (the infamous IJsselhallen for still angry Slayer fans) when Joe Lynn Turner was vocalist and that was awesome. Later on we saw him in Arena Rotterdam (when Arena was still a venue in Rotterdam and not a stadium in Amsterdam) Matters turned a bit weird that evening, when Yngwie introduced his wife to the audience halfway who waved at us?? So tonight we would go back to the good times and I can say this was the best Yngwie setlist I ever saw. I think it s disrespectful to the original to say that also the playing was better but we were in Heaven Tonight ( a song that did not make the setlist) Warming us up with Rising Force, I Am a Viking and Black Star showed this was a killer band of Italians and Mark Boals lost nothing of power in his voice over the last 30 years. When thereafter Trilogy followed and we could shout along with hits like You Don't Remember, Liar or The Queen is in Love it was happy faces all around. Interesting how you can sing along with those songs from the eighties when LP's made you read and consume the lyrics as well. The evening ended with I See the Lights Tonight and a bit of Led Zep. So thanks to Ron for putting this evening together and I hope to be back often in Cafe Bel Air.
Posted by erikprogtricolor at 11:50