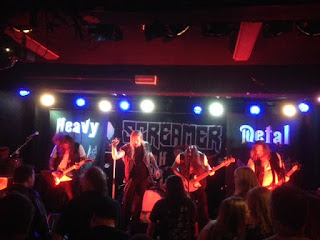 A Tuesday night turned out a good night for Heavy Metal in Musicon. For me this was going to be a bit different again as support band Screamer from Sweden would stay at my place after the show. Now I must admit that I only knew their name on forehand, never seeing them play live before. So in comes the internet for discovering and I was expecting a good show. And no Rene, this was not the first band staying over I did not know in advance. Starting at a for a Tuesday fairly late nine it quickly became clear where Screamer is taking us with their music. 80's Heavy Metal is the base, not too dissimilar from several of their countrymen bands. Most important in these bands to me is an enthusiastic presentation and no complaints on that front here. All five seemed to be enjoying themselves and movement on the stage was constant.  The songs themselves were fine as well and the set build-up seemed to work for me as they ended with three of their strongest songs: Warrior, Monte Carlo Nights and Rock Bottom. After their set I did what I do in such occasions and got their last album Hell Machine. Nice band and as I understood today you can the coming months still catch them in varied places like Holland, Germany, California or Japan. Don't miss it. 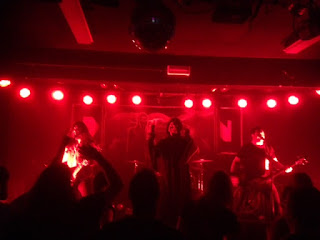 After an alcoholic little break we got Night Demon on stage. Now this band seems to be going from big to bigger especially in Germany as I understood. First time I saw them in The Hague, was in de Vinger. Well that place closed down twice in the meantime, but Night Demon are still going strong. Opening with Welcome to the Night and Full Speed Ahead they set the pace and the pace was fast. Night Demon is not a band wasting time on long introductions for songs, they just rock on. This is all brought with such energy that it seems to me impossible not to appreciate their show. In between their own fast songs they also included one or two covers during the shows I saw by them. While a few years ago Diamond Head and Jaguar were celebrated we now got a to me surprising version of  In Trance. Made me wonder how long ago it was I last played Tokyo Tapes. The second cover in the encore came less as a surprise as they brought us Radar Love again. The Hague gave the world two all time classic rock songs, being Radar Love and Venus. The Night Demon version is nicely metalled up a notch and rocks like crazy. All in all this was one roller-coaster set, with a fourth figure hitting the stage during The Chalice. Night Demon obviously toured a lot and it shows, great band for a celebration of live Heavy Metal. And then today breakfast was fine with the sympathetic guys from Sreamer SWE at the table. Skol. 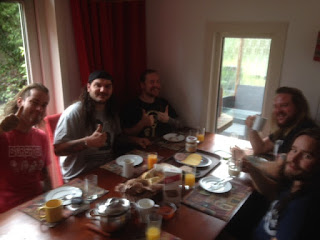