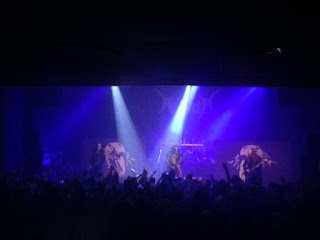 An evening of more extreme metal in de Nobel and while travelling down I realized de Nobel is good busy (goed bezig). Not that old yet, they managed to become the best reference for all genres of metal in western Holland really (not taking metal clubs like Baroeg as reference) Let's face it:  Paradiso is dead for good music for ages, Melkweg only books more modern metal or trends, Patronaat is OK, Paard is shit en Boerderij avoids anything too extreme. Nobel brought us a wide range of metal bands and is not shying away from any style. Next to that the hall is close to the station and nicely laid out, with garderobe inclusive on any ticket. So heads up Nobel, but why was I going here? Well last year I saw Abbath from a long distance recovering at Alcatrazz and that sounded pretty fine to me. As for me indoors always beats festival gigs I was curious to see how this would work in Leiden. Wednesday evening but the place was pretty full although balconies were not opened. 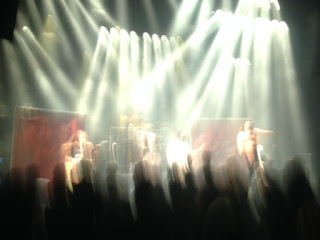 Openers of the evening were Danish Death Metallers Baest. Well that was one enthusiastic performance appreciated by many. The vocalist looked according to Koen like any player of FC Den Haag in the mid seventies and yes Rob Ouwehand comes to mind. The music though was nothing seventies, but more nineties Sweden really. I hope they make a name for themselves on this tour as there presentation made them deserve this. Up to Abath to follow this up and that turned out to be no problem. What I liked most about the whole show is Mr. Abbath himself. He obviously does not take himself or anything too serious and is a top class entertainer. His moves and inter-song banter was very funny. At times announcing a new song he sounded as calling his dog home, while later on he suddenly would scream high. The music of the evening was as good and he obviously mixed his solo work with Immortal songs. Are we Immortal? Yes, so we got The Rise of Darkness. This was one fine evening of Abbath, which is not that far from an evening of Heavy Metal really. Most interesting at the end was watching the merch stand if anyone would buy the balaclava (thanks Zoe and Google translate) Funny as it might look one tends to get arrested wearing this in public in Holland.
Posted by erikprogtricolor at 09:54