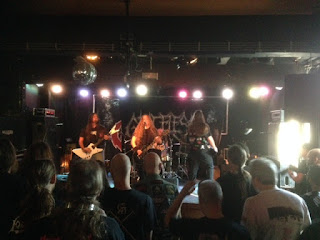 This weekend really meant the end of holidays in Holland ans now schools all over the country restarted. Also the concert year unofficially opened for me. Friday we had the brilliant Q5 in Little Devil and this Sunday afternoon Musicon put on a dead metal matinee for the thirsty ones. So after bringing Josie to Schiphol I returned just in time for some blasts around the corner. It was good to see that I was not the only one feeling like banging a bit, as Musicon packed up decently. Even the Dutch Kim Young Un fanclub was present. 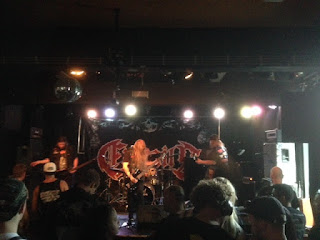 Openers were Dutch band Bloodmoon playing their third gig ever. Not a young band though they sounded pretty good although what I remind most after their show is that Diarrhea can cause Death. Graceless from Leiden came on next. They headlined Rene's birthday party last December and won over quite some fans that night. One of the many good Death metal combo's we have in the region.
Headliners of the afternoon/early evening were Swedish Death Metallers Entrails. The youngest band of the day by age, but a nice headliner. Admitted to me Death Metal is more live music than CD collecting obligation. Still when everyone mentions they sound like Entombed, it is probably true (and I do have Left Hand Path as well). Good show by this band, who came to a rather sudden end. I do like these afternoon shows as it gives time to have a drink, catch up with some people you haven't seen for a while and go home in time to have dinner just after Tiago. No need to mention traumatic Toilet Torturing details. Next show this Wednesday in Leiden. Busy season started indeed.