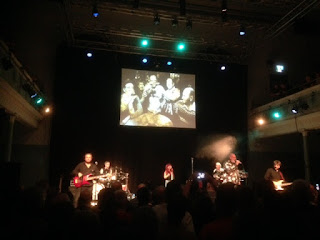 Sometimes the world turns in funny little circles, or in this case warm wet circles. I did not often use to buy tickets well in advance, as unexpected work trips made me loose too many of them later on. Now that this traveling is on hold I restarted guaranteeing my presence  at shows that probably sell out. So I did have my tickets for Diamond Head in Little Devil and Fish in het Paard in the pocket, when I discovered that that very same weekend is the best timing to visit Portugal again this autumn. So in the spirit of making friends of good music happy I gave both away and hope Lida enjoys Fish. Then on a whole other level of family business, Tiago has to decide this year on his future and Edinburgh is one of the two strongest candidate cities for him to start his study next year. Saturday the University had an open day and as this is the weekend of his birthday as well we made it a family trip Edinburgh, where we flew in from Schiphol and Josie took a plane in Faro. First things first Edinburgh is amazing. I was there once before some 25 years ago, but those memories are all fuzzily drowned. After having a motivational day at the Uni, we went for city walks and hit the Royal Mile also for Marillion's sake, when I suddenly found Fish would play the Queen's Hall opening the very same Weltschmerz/ Clutching at Straws Tour I was going to miss now. This show was sold out fast when going on sale, but I was going to try my luck at the venue anyway. Well talking about luck hopes went down when some 20 people were looking for tickets and none seemed to be on sale apart from a German girl asking three times the original price. And then I ran into Peter and Mark from Holland and we spoke about things Fish and Marillion when they informed they were waiting for a ticket and had one already. Long story short when they had two tickets they offered me to buy the expensive one as well (which went down to under two times the price by now) and share the pain, leaving all three of us to pay some 5 pound over the price only. Well at first impressed with their friendly offer I gladly accepted and we could see Fish opening a tour on his home turf. Thanks mates and the warm wet circle closed as it opened: with some random act of kindness. 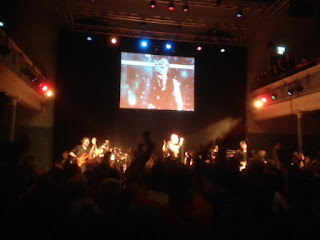 So now we were in the Queen's Hall, it turned out to be a kind of Paradiso with the balconies going round and a church like setup. Strangely there were benches to sit on at the same level as the floor before them. Hope not too many Scots got pissed off by watching my back. There was a support band as well, but Doris Brendel was there to be back-up vocalist mainly for Fish. Her own band was OK, but not something I would get on CD really. Nine 'o clock sharp and Fish came on welcoming us with Slainte Mhath. I think Fish is the world's main defender of Scottish expressions, as who would know what that meant or Incommunicado for that matter. This tour is called after two albums and that is what you get, music from both. This also meant new music, that will be released only next year. Maybe already available on some format, all were new to me and varied in quality at first hearing. Man with a Stick seemed to repeat the title a lot, well Little Man What Now, came over good. Highlight of the new album so far shall be Waverley Steps which was nice and epic. Than I realized we just passed those steps in the center of town, so it added to the atmosphere. Seeing Fish live on stage always holds two main questions. How good is his voice this time and to what level the band can reach old status. Well regarding the voice no complaints whatsoever, while the band had the usual trouble in following the classics. For me the Marillion albums with Fish were not only my introduction to Progressive Rock as such, but also the best four albums ever released in that genre. This means I know the albums through and through. From the past we know that Robin Bould on guitars is nowhere near as good as Steve Rothery, so he adapts the style of the songs somewhat. This evening however, what most stood out was the keyboard sound. During the trilogy Hotel Hobbies/ Warm Wet Circles/ That Time of the Night  it sounded rather horrible to be honest. This also caused by the rather poor sound at the start (another Paradiso similarity). During Just for the Record the Keys ended fast and in tune and as if the band were relieved as well, they went complimenting the man behind the keys. At the end we got some versions that sounded hundred times better than the start with a highlight of the set for me in The Last Straw where a loud audience shouted their lungs out as they were Still Drowning. This audience was Scottish, but seemed to hold people from places like Boston, California, Syria and Switzerland as well. During one intermezzo the Scots took over and sung to Fish something we foreigners did not get, which resulted in a small improvised song. I guess it had to do with his favorite local football team, as we were in Edinburgh after all. And then after two hours it was over and we knew we witnessed something different, Fish in Scotland. If the sound gets sorted out better from the beginning for the remainder of this tour you get a winner. Playing four or five new songs always holds a risk, but they went down well. Fish announcing his retirement is nothing new, let's hope for at least two more tours hereafter. One when we actually know Weltschmerz and one farewell tour. For now thank you for the music and Slainte Mhath.