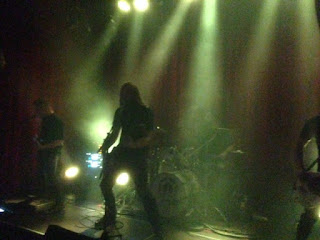 Metal and Denmark. My generation would first think of Mercyful Fate, King Diamond and Pretty Maids. Nowadays Volbeat seems big, but I know nothing of them. For progmetal fans like me, Mercenary, Anubis Gate and Vola come to mind, but this package was fully unknown to me. Four bands playing all a different style of metal touring for a week through England, Holland and Germany. With four bands and an advanced start I needed an early dinner in order to arrive just before kick-off at the venue. First sign that looked rather bad was that when buying my ticket the cash-desk was still locked, meaning I was the first paying visitor on the day. So few late deciders expected and unfortunately not that many early deciders either as the gig got moved to the bar stage. The only thing that can't be blamed is promotion as I saw various interviews with the bands on national metal sites. How many times can we repeat that those who do not support the underground slowly kill both bands and venues. This package was varied enough to have something for many. When entering the cafe I did run into Alex, so we could share some thoughts through the evening. Hardly having my first beer at hand Aphyxion opened the evening 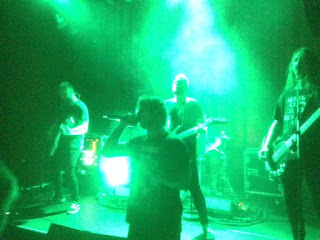 Aphyxion play Melodic Death Metal and in the interviews it was mentioned several times that someone from Metal Hammer UK called them the future of Melo-Death. Well that is quite something to live up to and to be honest the man was wrong. Their set was OK and brought with lots of enthusiasm  with the vocalist stepping of the stage screaming to us from really close. My main concern was that while there were two guitarists they seemed to limit their playing to hitting chords. The loudest instrument seemed to be keys, but they were not on stage. For me the result was that they turned into a band playing along with tapes which were too loud in the mix. Still it was not a bad show as such, but the above killed the fun a bit for me. Next on were Defecto, the band I was looking most forward to based upon internet listening. This band opened earlier this year for Persefone, but I could not make it that evening. Actually in Denmark they also opened for Metallica and Rammstein, so they have been in front of larger audiences than this evening. Well that could be seen on their professional presentation and playing. At several sites their style is called progressive metal. I would not necessarily call their music progmetal, as it mainly had an old school stoner-ish base with very good guitar solo's in it. No matter the name of the style, this indeed turned out to be my favorite band of the evening. Now playing their last album Nemesis, I can confirm they are as good on CD. Only remark would be the in between song banter Never sure if it is smart to insult a small audience of people who obviously never heard of you. As it was done with enough sense of humor I think they got away with it, just. 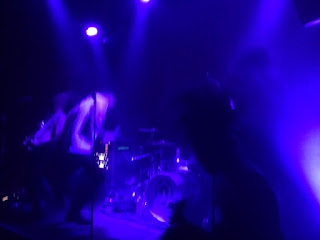 Hellhorse was next and four shirtless guys hit the stage, followed by a vocalist in leather coat. These guys play stoner/speed rock and were the most organic band of the evening. What you heard you could see and it was mostly fast rocking and rolling. Again a vocalist who made many meters through the cafe and a very lively presentation.  If Defecto were to me musically winners of the night, show-wise Hellhorse was best. Again the vocalist came close to provoking reactions, so that must be something Danish Demolitionars do. Good live band and the evening was already  a success to me. Last band Siamese still had to come and Alex mentioned that some friends were nicely impressed with them as heavy pop band at UK Tech Fest. I listened to some clips as well and pop was there mix with something heavy. When they came on and played their set I was the full 40  minutes on two thoughts. At the one end this was an uplifting show, with catchy melodies and hooks. On the other hand there was the question what is played live and what comes from tape. When you hear so obviously instruments and vocals coming at you that are not played it becomes somewhat strange. The younger part of the audience seemed to know and love them and that was my final conclusion. I should introduce Tiago to this band. I can see them crushing high-school and university parties. When discussing before their show if a bad like this could play Progpower, my vote would be a big no, for overdose on tape. Yet if you are down this music will lift you up. Teenage metal it was. When they asked for a pit in the end, the karate couple jumped in again and we got the weirdest pit of sorts. A strange end to an amusing evening. I hope more people find their way to Muziekcafe in Helmond tonight. How often do you get 4 Danish bands to choose from? 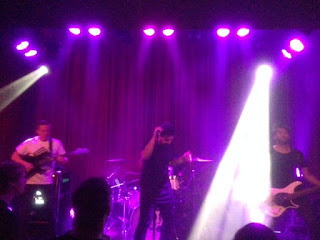