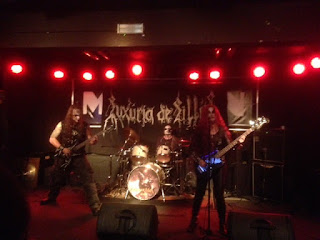 Brazilian Black Metal in Musicon that is three reasons in one go to spend another evening: Brazilian, Metal and Beers. Also this was for me another chance to get an inside look into touring bands as Imperior Belial would stay over after the show. As we had only two bands with a rather short set tonight, there was no pressure on time schedules. So after enjoying their Chinese meal, Luxuria started their sound check. As we had a surprising late summer evening, waiting outside with a beer was a good option. When Luxuria de Lillith started they turned out to have their faces painted, which during the hot evening in Musicon started to run during the show. Their music was melodic black metal and sounding very accessible. First thing one notices is that the brain behind the band sits at the back. Alysson Drakkar drums sings and most interesting announcing all the songs in Portuguese. Now as I get Portuguese I could appreciate the talks, but was at the same time the only one understanding what he was telling us. Well he missed Brazil after being abroad for some weeks, but loved being with us in Musicon.  Later on he would have some interesting talks with his translation app. Their set was nice and I now could add another genre with Portuguese lyrcis. After progrock, Heavy Metal and Progmetal, Blackmetal has been added. 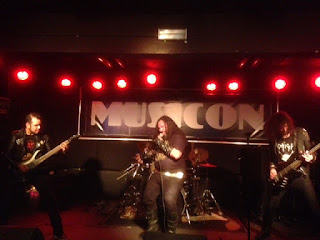 Imperior Belial came on next and reminded more of eighties cult metal. No painted faces, no typical Black Metal shrieking voice, but metal. Turned out they convinced me as well and put on an energetic set which was over before we knew it. This because of both the playing and the lenght of same. This gave everyone plenty of time to visit the very extensive merch tables: Cd's, Lp's Cassette tapes, patches and shirts. I think they did well as most people loved the bands. Later on I got at home to hear the stories behind their scary road trip through Europe and the learning curve this tour means. Both bands are already planning a return and I will be there again. Probably I shall run into Wesley again as well, their fan from far. Finally Raphael once again confirmed that the majority of metalheads in Rio support Fluminense so we could even remember better times of Fluzao. Ending in Alysson style: Foi bom ver vcs caras, espero a volta de vcs em breve e vamos passar mais um ritual. 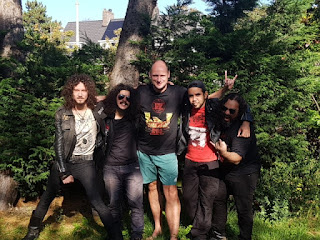