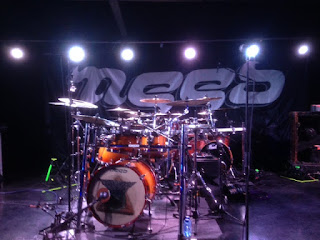 Evergrey and Need is a tour I would definitely like to see, but almost managed to miss. Last weekend they played two shows in Holland, but our program that long weekend was scheduled around Tiago's birthday and Josie being over from Portugal. Then on Thursday they returned to Holland and Hans and Mary went asking me if I liked to join. Now this was last minute and I did not feel like telling Tiago on the day I would be away for the night as Hengelo is too far for  a nightly return. So my chances were Belgium this weekend. Josie in Portugal and Tiago camping in the mud with scouts. Then came a footbal team reunion in Huppel the Pub Friday night and I knew this would be heavy (Os Belenenses we are coming to rock Estadio do Restelo). When I woke up Saturday late I was still undecisive on the plans for the day, considering Belphegor in Amstelveen. And then a picture came by from Esther with her birthday present from Need and the positive energy from that message made me decide to get in the car and drive down to Diest.  Checking which hotel the dutch Need stalkers (Jon V.'s words) were staying in, and hallo Belgium it's me again. 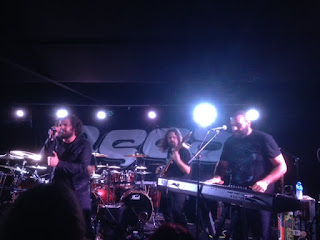 Moonlight is a bit of a tacky name for a rock and metal cafe, and the entrance at the muddy back was well hidden. Entering the hall it turned out to be spacious, with unfortunately not that many people in. Luckily during the Need gig more people had entered and it ended Ok-ish in numbers. People who came in late, probably did not know Need or the deserved hype in tiny circles around them. Now asking Ronald, Lia, Esther or Michel if Need is any good live would result in rather biased opinions. But also some other friends of mine who saw them in Leiden and Hans and Mary in energylow Hengelo loved their set. Now I knew Need from their last two CD's. I love both albums, apart from the spoken word songs. With a slot of about 45 minutes the focus obviously lay on Hegaiamas. Starting with their two opening songs. Orvam was represented by Mother Madness and Tilikum followed after which the last song was already announced. In good Prog tradition this song lasted twenty minutes so we got all in all a decent time of music.. And what about the performance on stage? Well I  got the hype and what an energetic, sympathetic and powerful perfromance. The grunts from the keyboards were used here to add something to the songs and individually all five knew to impress. During closer Hegaiamas it was nice to see a spot for the bass and later on Ravaya picking his Steve Rothery moment in the spotlights. Closing his eyes, giving us a nice melodic solo, the resemblance was there.  Need was all I hoped for on stage and definitely a great live band who would fit the bill on a certain progmetal gathering which talkes place every year in Holland. 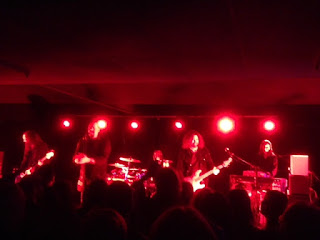 Now visiting Diest with the Dutch  Need fanclub did not mean that I was not looking forward to Evergrey on stage as well. I first saw Evergrey during the first Progpower in Baarlo. I did not hear of them when in Brazil and did not know wat to expect. The main thing I recall from that show was the big scandinavian bassist in a leather skirt. I also liked their music, but never rushed to get all their CD's  I have a few and through the years saw them a few times as well. Possibly best show was in Arnhem as they toured my favorite album The Inner Circle and Mercenary at 11 Dreams times supported. Evergrey's music has some typical features. Their Progmetal is dark and heavy, the piano comes back dominantly through the set and samples from child choirs or spoken words are also heard more than once. Evergrey also have the habit of putting the volume at 11. With my last minute decision to go I forgot my earplugs, but Moonlight music hall had a free box of plugs at the entrance for all to pick. Tom Englund has a typical voice (wondering how that will work with Redemption) and finally Evergrey also knows to write ballads that are not cheesy. Not having all their albums, means I do not immediately recognize all songs played. With Evergrey usually even the songs you do not know go down easy by first hearing. So the show passed by fast and the playing was confident and tight. In the encore we got two of their best songs in When the Walls go Down and Recreation Day. I donot recall any poor Evergrey show and this one again was good. 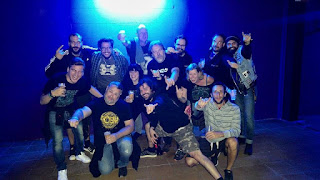 So if ever the decision to drive down to Belgium was a good one, for me it was yesterday. The company was very nice and the Moonlight stayed open afterwards for all to drink and chat together. Yes Need are nice guys, although they asked me to name them bastards to increase festival bill chances. I could complete my Need CD collection, buying their first and even got Evergrey's last based upon this show. Also meeting two Greek Luxemburgers who shall be in Baarlo next week, plus the black T-shirt invasion at breakfast made this a ProgPower prequel indeed. And a damn fine one it was, Efcharistó.