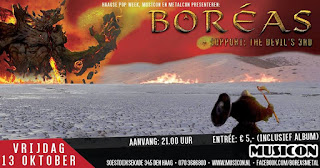 Boréas is/was a neo-classical power metal band from The Hague. On 13 October they had their career defining and ending event, so I had to see this small part of local metal history. Releasing your debut album, performing it in full and calling it quits on one night is a career that went by at the blink of an eye indeed. Or in this case at the bang of your head. Neo classical Power metal is a wide term and as I was fan of both Yngwie and Helloween in the eighties I liked to see what they would present us. Nowadays this style is not all that popular in Holland as we see it more a German thing to play and call it degrading Happy Metal. Curious if they managed to attract some crowd it turned out full of bicycles upon my arrival. Well that was from a party in the church next door. Inside it was not that empty either. Friends and family turned up in decent numbers with the parents being around my age and several younger friends in. Hope these people come back 8 december when an eighties original (Stampede) hits Musicon. 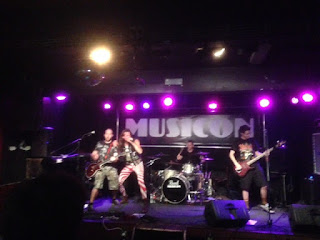 A party in the Church or not, we were warmed up by The Devil's 3rd. When they asked halfway if they should play another song about satan, the reply came in "ja altijd gezellig". They played Baroeg Open Air this year, but way too early for me to make it. Now I could catch up I did like their heavy metal with some thrashy bits. The vocalists looked as if he came straight out of 85 although he probably wasn't even born at the time. After some mic problems during the first song they got the sound fixed and it turned out to be a band to follow. Nice songs, good playing and a lively presentation. Coming from Tilburg to The Hague the most wait and see audience around, it was hard to get things going for them. The rather strong accent inbetween songs was met with "does anyone get what he is on about", but they did not seem to care and rocked on. We shall hear more from them. 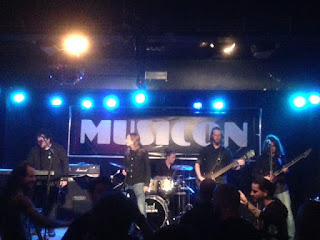 And then it was time for the ephemera moment of Boréas. Now Boréas is not a touring band and vocals and drums were hired guests. So it was unclear what to expect really. Well They did not disappoint on the lack of playing. When there were breaks inbetween the songs, Olax (who played a home match) easily talked things together. When the fairly long intro was over and they started it was nice to hear that The Hague now had such a neoclassical powermetal band as well. The playing by all five members was good, the songs were ok and of course as is demanded in this style we visited all the cliches. I heard even the Hall of the Mountain King passing by, while we also could sing along with Maiden alike ooh-hoo-whooos in Power of the Ice. I did not mention yet that the entrance was only 5 Euro and everyone got the CD as a bonus. Well playing it now it sounds nice enough indeed. It is hard to be original in this style of metal and I guess I somehow outgrew it a bit, but we had an entertaining evening. Coming back to friends and family from the beginning I could see this was not their favorite style of music either, staying mainly in the back. The party could have been bigger for a one-off event. Yet I guess that everyone had a pleasant evening and I can't advise even to go see them when they are in your area, as they won't be. Thanks Boréas for putting The Hague on the Happy Metal map as well.
Posted by erikprogtricolor at 11:39