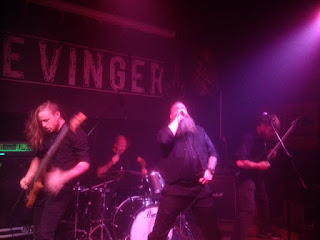 An evening of Stoner/Doom in de Vinger. Now I do not play a lot of Stoner at home. At the same time I believe in supporting live music, venues and especially D&ESR. I already had many good eveningswith Ben's shows. This type of music for me works best with a few beers and live on stage. Unfortunately I was one of the very few  people having the idea of going to de Vinger. Always surprised how the few thousand students (well thats how they call themselves, technically they are not students) we have in The Hague at HBO and MBO don't do live music on a Thursday night. Is our whole youth wasted on dance music? Anyway I did run into Vitus Frank while entering and we had some beers and with him I could hear some nice Stone in Egypt stories (Their bassist played in Osiris so I might have seen him play some 27 years ago). To make turnout matters worse this evening was the opening of teh European tour for two of the bands flying in from the USA. Well the music did the talking and I had a good evening anyway. 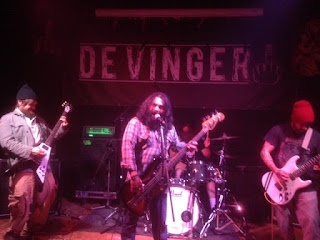 Boudain opened and they did so heavy. Their style and presentation seemed somewhat off the wall. I could not understand the introductions of songs if any, as the mics were not clear when talking. Their set was building slowly and improving and they closed with the best song, which might have been called Godzilla. Their fellow countryman from Void King would follow. First thing that stood out, was that they were much more slick dressed. All in black shirts and the vocalist even a black vest over that. Their music seemed also somewhat tighter and to the point. The energy coming from the stage was good with the only problem being the constant opening of the smoke machine killing our beers and itching our noses. This meant two good performances from the USA. Dutch band Stone in Egypt were to close the evening and they did so very well. Frank told me during soundcheck that their drummer is a heavy hitter, well there was no word greek in that. He did not only hit heavy he also upped the tempo compared with the first two bands. If we combine this with very good guitars and a bassist with a background in Osiris, so obviously knowing what he is doing and we have a great live band. 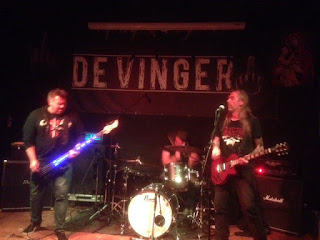 The two American bands are touring Holland, Belgium and Germany the next week, while Stone in Egypt rejoins for a festival in Kampen next weekend. I'd say go see this package. If you are into live music in general you won't be disappointed and these bands deserve more people than the handfull that made it to de Vinger.
Posted by erikprogtricolor at 16:05