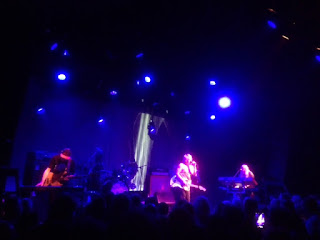 Pendragon in de Boerderij is a yearly event and mostly they sell the place out as well. By coincidence I bought my ticket on time this year as I think I skipped their past two shows. Only later I realized that In the Woods was headlining Dutch Doom days the same evening and I would love to see that band once as well. Pieter was late buying a ticket, but got lucky by trying at the door and into a packed Boeredrij we walked. A sold out Boerderij is in my view always a bit too busy. This combined with the unflexible and quiet audience of bold and grey men (basically like me, but then smaller) does not always guarantee a great atmosphere. Starting with that, tonight must have been one of the least atmospheric Pendragon shows I ever attended. Seems to me that band and audience are getting older and quieter. What did not help a lot either was the support of the evening. One of the backing vocalists has her own music and was allowed some time to warm us up. She was enthusiastic and could sing very well. Yet if I want to see a girl singing along to a computer I can watch Idols, or The voice on TV, which I never do. Further when she announced that the bloke with the headphones on, playing along on guitar was her husband, several of the bold and grey men were disappointed hearing the boo's to that comment. Waste of time really this opener and I was not the only one thinking that. 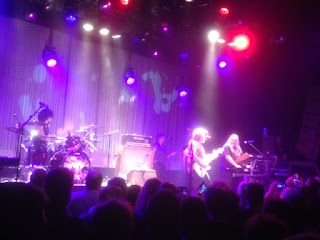 But still we were at a Pendragon show after Marillion they are probably my favorite Prog Rock band. First time we saw them was when they opened for Marillion in Vredenburg during the Misplaced Childhood tour. Hereafter we saw them peaking at many locations, the Utrecht live album in 1994, headlining Rio Art Rock 98 from 01:00-03:30 on a weekday, Loreley's Night of the Prog and many Boerderij or Melkweg shows. This turned out one of their lesser shows also due to the setlist. The core was build around The Masquerade Overture, not my favorite. Further their last album Men Who Climb Mountains also got three songs, of which only Beautiful Soul impressed. Further to me the recent albums Pure and Passion are amongst their best and both only got one song played.
Yet still we had a great evening as after all we had Pendragon on stage. So they did play from my favorite album The Window of Life  their jumping party song Stargazing and their best song ever Breaking the Spell. This power ballad basically has some opening lines which go into an amazing eight minute guitar solo with some ending words. I always remember the guy bursting out in tears next to me at Loreley when hearing this song. Emotional lyrics and emotional guitar solo's do that to people with a soul. Also their best song from this century This Green and Pleasant Land came by in great form. If we than add final encore Indigo it is clear there was plenty to enjoy. Pendragon are working on a new album and surely will be back in de Boerderij again. Probably I am tempted to go and see them again as well.
Posted by erikprogtricolor at 11:15