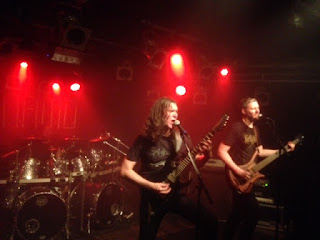 An evening of British Black Metal in Dynamo and setting the ballpark I came to see Fen. Some time ago my friend Andrew from Ave Noctum fame, tipped me on Fen. So when earlier this year their last album Winter was released I followed the usual steps, bandcamped - purchased - hooked. Now I quote their bandcamp page to describe the music. Inspired by the windswept, desolate... landscape of England’s Fen region, the band set out to fuse the cold rage of Black Metal with more reflective influences, creating a deeply intense and atmospheric sound which speaks of loss and melancholic yearning. For the haters this might be prententious bollocks, but to a sensitive and poetic guy like me it makes all sense when you hear their music. The world is in a dark place at the moment and our Dutch office is starting to be dismantled in steps. So I could use nothing better than this desolate music with huge walls of sound interrupted by melodic guitar parts in brilliant variation. 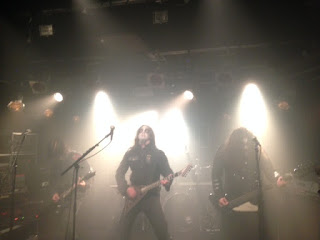 But as I said before this was an evening of UKBM. So there were others at play. Opener of the evening were Necronautical, the only band with painted faces. Their music was more epical and warrior alike. I listened to Black Sea Misanthropy in advance on BC and quite liked their style. Live they turned out steady, but maybe not as furious as I hoped. Their music was mainly mid-tempo and the vocals seemed to come from all around the basement. A good warm-up band, but just not exciting enough for me to rush to their merch table. During their show some more people walked into Dynamo basement, but it never got packed. Maybe Satyricon the night before in nearby Tilburg took too much money and energy for several. 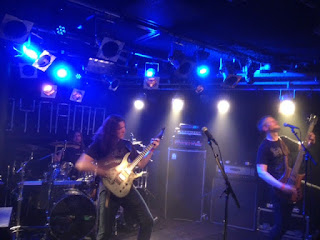 Next on were my target of the trip Fen. Guitarist vocalist The Watcher not only looks like Geddy Lee, he also opened a square meter of effects in front of us. Later when he started singing, the high pitched Rush vocals were not to be found though. The band opened  with Winter I (Pathway) followed by the next song from Winter. Being two songs down, this meant we were at thirty minutes in the gig. Being a support band I feared a short set, but we got three more older songs, which meant they almost played an hour. Well what can I say about this hour. The atmospheres created on stage where the calm breaks worked live so well were just amazing. I am not the biggest Black Metal fan, but these epic songs should appeal to many outside BM world only. So to my PPE friends who enjoyed this year bands like Beyond Creation, Fallujah or Revocation I'd say give Fen a try next time as well. While the show is all about the atmospheres created during the long songs, the individual playing was flawlesse as well. But then again what would you expect with names like Grungyn, Havenless and the Watcher. If I was hooked after hearing Winter I now definiteley am a Fen fan after seeing them live. Turned out to be a sympathetic band as well, at least Havenlees when talking to him after the show. So I got the Tee and previous album Carrion Skies. They return to Holland in December, but I can't make it that day. Hoping for many more returns and I will be there. 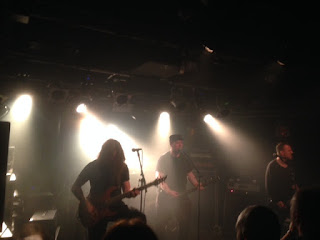 There was a headliner as well in Winterfylleth. They tour celebrating their tenth anniversary and they play a style not that dissimilar to Fen. Yet I made the decison of trying to be home around 00:30 with a long train ride ahead. Well that decison was the wrong one for two reasons. First the NS (our national rail amateurs) decided to cancel my train, which made me detour and arrive two minutes before the alternative train half an hour later.  Second the two opening songs I did see were very interesting. A bit shorter and to the point than Fen, they also created good atmospheres. In their presentation and demands for shouting along in the audience I thought I saw some british football hooliganism chants as well. Definitely a band to explore and delve into deeper in the future. I thought being wise and go for some sleep before the seven o clock alarm on Thursday morning. That was punished, so after setting the rule music over football always, I now should add music over sleep as well it seems. After all: All will fall, all will sink, all will drown, all will fade!!
Posted by erikprogtricolor at 12:14