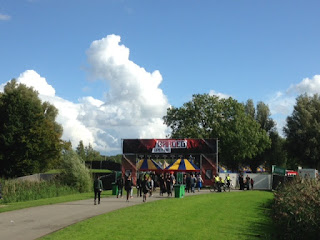 The sun always shines on Baroeg Open Air. The picture above might make you think that is true and it is, but this year it took many by surprise. The day before we saw awfull amounts of rain fall over us which in The Hague even resulted in trams stopping or detouring through the city. So arriving at the other Zuiderpark it was a huge surprise to see the sun out and a field that was much better than expected. Later I learned the main field has a drainage system. The sides do not, so entrance and toilets were a muddy and slippery affair. Still thanks and respect to those who put together the area over the last tow lousy weather days (especially the crippled lady with the huge hammer). So the weather was nice and the area fine, so what about the music. 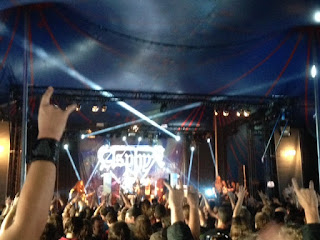 I came to BOA to see Tokyo Blade again. With the rain still falling at home in the morning I was in no rush to get to Rotterdam. Checking on the bands in advance one other band I would have loved to see was French band Year Of No Light. Unfortunately they were on stage at 14:15 which meant I was to ignore Tiago the whole day and with several additional drinking hours chances of being too hung over to make it to Little Devil today. So the wise man in me made me arrive close to five when Dool hit the main stage. This band played almost every festival around this year and finally I got to hear them. With the dark stage and the sun outside to stand in seeing was not an option. They surprised me positively as being heavier than I thought and their doom crept around nice with a highlight in Love Like Blood even slower than the original. Next to the toilets there was the a tent where the interesting Pleesessions took place during breaks at the main stage. As this turned out to be a low and muddy affair I managed to miss those bands even headlining G.O.D. In Large stage the banner of Asphyx meanwhile came up and they would probably be the silent headliner of the day. Now I am no Death Metal expert, but love a good live show and Asphyx might be the best Holland has on offer. This was one blast from the stage and the atmosphere was impressive in the tent. A rather great pit up front and raised horns untill the end. Vocalist Martin van Drunen talked us through the set with his eastern accent and dry sense of humor.  Funny how he thanked the large crowd and complained how at times in clubs they only get 200 people in (an average clubshow I attend should be happy with 50 paying visitors). Yet I did have a great time watching Asphyx and wondered how Tokyo Blade would follow this up. While talking to Toner Low in a now empty tent suddenly Magchiel walked in. Injured ears or not he decided he did not want to miss Tokyo Blade again, as was the case earlier this year in Musicon. 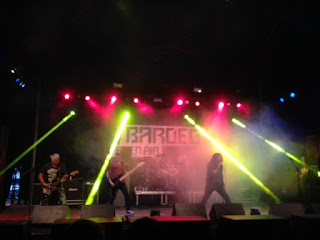 So the next steps were muddy toilets, bar for refill and getting a good spot up front to undergo Tokyo Blade. Over the last year I saw Tokyo Blade in Baroeg and Musicon. This time they would have a large stage and a large crowd. Well that served them right as we were in for a treat and so was the band. Somehow I do not think they get often circle pits or crowd servers during their shows these days. Let's face it people who love this music tend to be around my age and less crowdserving in general. So the atmosphere in front was great and the band seemed to enjoy themselves as well. We got a fast set with many highlights. Magchiel got his Night of the Blade and we could shout along with Lightning Strikes, Love Struck, Someone to Love, Sunrise in Tokyo and the closing If Heaven is Hell. Totally loved this set and I wish all my heroes from the past would have such a stage and audience to undergo the power of NWOBHM in a fitting setting. I did see a main reviewer from Rockmuzine shouting his lungs out as well, so count on a positive review there. Only comment I have is that again Tokyo Blade did not bring any merchandise (or hit it really well) This year they released a box set Knights of the Blade. Ordering from internet music you mostly own is one thing, running into it after being on a post gig high means for me an immediate purchase. 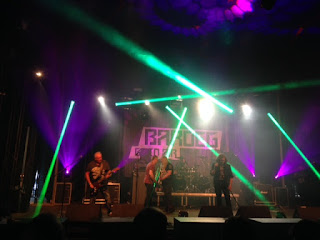 For us this meant the end of Baroeg Open Air. Magchiel came by car and I enjoyed the ride back. Destruction I saw not that long ago and shall see again. We met with Magchiel's metal cousins, but as they arrived at 14:00 hours we might as well speak greek to them. The talent stage was far too early for me and the Electronic stage did not manage to get my attention with the computer sounds coming out of it. Baroeg Open Air opened a season which hopefully brings me back to Baroeg several times. Pity that both Submit Fest and Angra/Tate seem to fall at dates when I am in Portugal, but enough on offer I guess. And I survived fit enough to enjoy Toxik today.