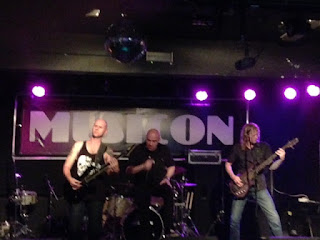 Three weeks without live music and I started shaking all over. Partially my own fault as I let a work call make me miss Uli Jon Roth and decided on watching France-Holland over Ritchie Kotzen in de Boerderij (wrong music over football always, even more wrong a sfootball turned shite). Suddenly this weekend I can correct a lot and even choices needed to be made. For the Friday the choice was staying close to home as it was pissing down all day. So sorry to UFO/Europe in far away Eindhoven, or The Tangent in de Boerderij. Musicon had in Razorblade Messiah and Thoughtless two unknown bands to me from Rotterdam and Alkmaar. Checking out some Youtube clips it turned out we would be in for an evening of Heavy Metal. Pieter thought(more) and also considered this a good plan, so forget about the rain and have some beers in Musicon. 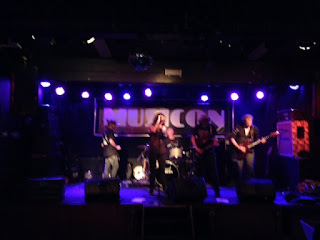 Thoughtless were first on. Their heavy metal went down well and had light progmetal touches. Turned out that their drummer whom I did not know is also a ProgPower regular. A female vocalist on paper always raises concernc with me, a sI am allergic to operatic nonsense in metal. No such shrieks here as we got real singing. Nice band which deserves some more attention, as the young regulars in Musicon decided to stay away en masse. Is true heavy metal really music for my generation only? This can't be true as timeless metal we got on stage last night should please many ears.
Next on were Razorblade Messiah whom I liked even more. Their mainly fast metal made me remember the mighty Attacker at times. Fast I mentioned, but also Epical and at times Maiden like. Their single Metal Messiah is a killer headbanger and can be seen on YouTube. Live as usual they came over even better. Later on we learned that they have some music on Spotify, but no CD's yet. So I am now playing Attacker's latest Sins of the World to stay in similar moods. A very nice evening in Musicon kicking of a metal weekend.
Posted by erikprogtricolor at 12:46