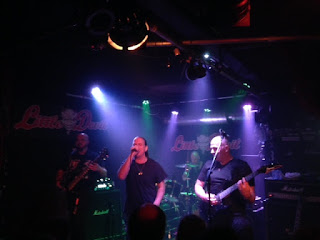 Toxik, Tyranex Thrash = Train To Tilburg. Toxik played Dynamo Metal Fest in July and the reactions were mixed. I could listen through any sound issues and loved it. Yet having the chance to see them again but now in Little Devil simply could not be passed.  Being in Tilburg I quite liked the timing today, following Baroeg Sunday style two bands between 17:00-20:00 hrs. Openers were Tyranex from Sweden, a band unknown to me. They played Tilburg some times before and turned out to be a good band. Thrash metal with female vocals/guitars plus bass and male guitars and drums. This young band had the presentation and playing to keep me interested for an hour. Forgot the song titles by now (apart from Tormentor), but good warm up. Passing the merch table at the break I ran into a surprise anouncement: Toxik this Thursday in Lazarus- Leiden. Now I could think I might have stayed at home after a busy weekend or even gone to see Dead Lord promote their new album this same Sunday. In reality I'd rather leave from the half full glass theory and now can see Toxik twice within one week. The Leiden show shall be for free, so anyone missing out tonight  can come to Leiden on Thursday. 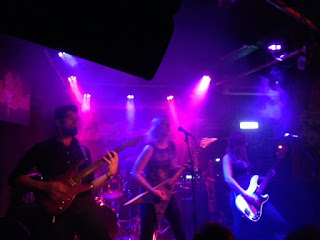 Toxik on stage in the same version as two months ago in Eindhoven. The girl on stage during the soundcheck confused me somewhat. Halfway the show it turned out that she was guest for one song, a nice initiative from the band. Toxik live was again fast, heavy and thrashing. While they did not play their ballad "There Stood The Fence" I believe a free version of that song described the evening best: "There stood the band that banged my head when I was younger".  When others tuned their instruments Josh commented how he is now 52 and most of the audience not far from that (guilty) and we all never grew out of metal. We keep on doing this (they play, we watch) until we can no longer do so physically. The evening was one among friends according to the band and with songs like Spontaneous, Heart Attack and Think This they made their friends happy. One week ago I received their new EP in the mail (it took the US Mail pigeon five weeks since release). All three new songs were in the set and knowing them now they blended fine with the old songs. Breaking Clas$ is a fast monster live. Charlie did a John Corabi (read my review on Dead Daisies in Zoetermeer not Rotterdam) and thanked Leiden for their reaction. After one hour and a bit it was over. The band shot a picture with the audience and gave us one more song. I knew that seeing them in a small club would be better, but they topped expectations. Great performance, great songs. So Thursday Leiden it is. 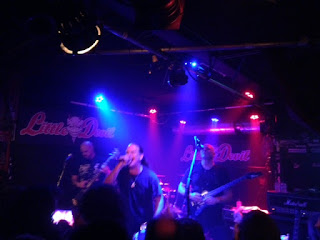