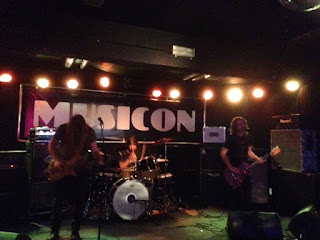 While anyone with Prog in his alias hangs at Ayreon in 013 this weekend, that is just not my favorite band or project. As a good substitute Musicon put on two bands from Eindhoven who play something like stoner, sludge, post metal. Niels and Robert advised they would go as well and Zoe and Rene were at the bar upon entrance so it turned into a good Saturday night. Local band Durango had to cancel due to a broken little finger. Pity as there was space for more people inside. 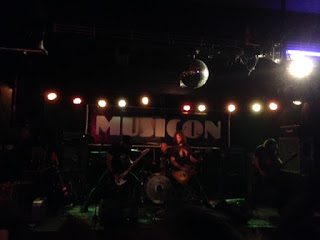 Not that An Evening With Knives seemed to care much. They rocked all over us with slow building songs that reminded me of Neurosis or Isis. Rene mentioned Solstafir and that was a good indication as well. This was perfect music to see and feel live. Probably the band I liked best of the two and strongly recommended when playing in your area. Komatsu holds an extra guitar and sings more lyrics. Further the music was a bit in the same vein. Actually one of Holland's biggest stoner bands and they have some shows under their belts it seemed. Good band as well although we agreed the sound was a bit too massive to get all the parts played individually. And yes Ben, I shall return to more D&ESR shows in The Hague. Always a pleasure stoner in Musicon and with Vircator releasing a new album who knows they return one day as well.
Posted by erikprogtricolor at 11:00