Two very different albums today. One pop and one hard to pinpoint extreme metal. Yet both are beautiful in their own right so herewith some of my thoughts. 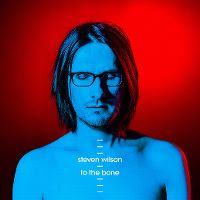 Steven Wilson - To The Bone
Steven Wilson announced his next album to be pop, so I got scared. Following the man fo rmany years in different bands, I knew he mixed pop in before. My favorite albums of him are probably Stupid Dream by Porcupine Tree and The Raven solo. Actually many of his projects are great and some things are always guaranteed. Steven Wilson writes great songs, the sound is benchmark level and his lyrics tend towards the dark and morbid at times. For this album I heard some music in advance tracks and I must say that did not make me more comfortable. Permanating did not make my metal heart tick any faster while refuge was nice, but very calm. Yet after several positive indications from friends and raving reviews all around I got over my fears and bought what I found turns out to be a good album. For me The Raven and Hand.Cannot.Erase were from another level, but here we get another collection of Steven Wilson quality songs. OK there are a few misses to me in Song of I, The Same Asylum as Before (what voice is that?) and the before mentioned Permanting. Leaves us with eight very strong popsongs, making an interesting album. The great side-effect of this album is that Steven Wilson now became a household name. Performing live on BBC and ZDF should open a whole new audience to this man of class. So far the results are album chart positions 2 in Germany, 3 in the UK and 4 in Holland. Not bad for a king of Prog. I might have to decide fast now if I would like to see him live next March, cause venues shall grow with him. An album much better than feared and a promotion of Prog in many English newspapers. So we have to thank the man again. Maybe not his best album, but definitely a boost for our music in general. 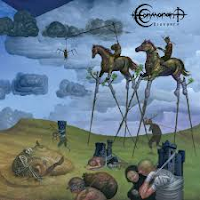 Cormorant - Diaspora
And now for something completely different; Cormorant. Why have I missed this band before?!? Every now and then you get an album at hand which completely blows you off your socks. Well Diaspora is such an album. Thanks to the Angry Metal Guy I read about them and decided to listen the two available bandcamp songs. Well that resulted in a quick purchase and since the album arrived begin this week it hardly has left my CD player. Cormorant are from the Bay Area,.yet the only heavy style they do not play is Thrash Metal. On their FB page they decsribe their music as Progressive Black/Death Metal. And yes these styles are there, but there is more. During the tracks Preserved in Ash ,Sentinel and The Devourer I hear Black, Death, but also signs of heavy Doom and Heavy Metal. Closer Migration is their Prog metal Epic song lasting 26 minutes. With four songs in 60 minutes Cormorant have plenty of time to swap around the extreme styles, with an ear for calmer intermezzo's when asked for. So the vocals move accordingly from brutal and harsh to clean. Those who believe the instumental atmosphere building part in Migration too long, probably also complained about the guitars at sea during Rhyme of the Ancient Mariner some thirty years ago.  While searching for more information on this band I learned this is their fourth release. Maybe the fact that they are independent did not grant them the exposure they deserve. Yet at Lords of Metal all three previous albums are reviewed and highly appreciated. Ranked smartly under different metal as labelling is hard to impossible. Further while independent they might be, the cover is amongst the most beautiful this year with a Jheronimus Bosch alike painting. Resuming this is one album that should be heard by anyone into any of the musical styles mentioned above. This could have been the technical extreme band around the dinner break at PPE, which blows half the audience away (and is too heavy for the other half). For me there was little time to waste and I ordered album 2 and 3 now as well. How nice to discover new favorites with a back catalogue to dive into as a bonus. One of the candidates for album of the year to me, let's see how the next months work on this one.
Posted by erikprogtricolor at 10:48