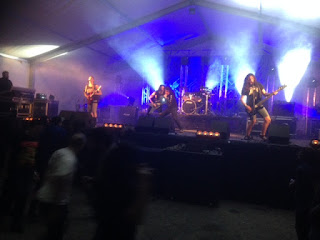 This year's EMF was my first introduction to the Portuguese Metal underground. Last year's Steve Vai was good, but not metal  while the  timing of our trip now coincided with Évora Metal Fest. As it was within our limited holidays, where Josie moved apartment in Beja, we visited several castles and ate many Black Porks I could go for one night only. In order to get to know the local scene and stay updated I do read Portuguese Metal mag Loud!. Going through several issues it is easy to see that Portuguese underground leads heavily to the extreme and alternative side of metal. The Full line-up for EMF confirmed this and to be honest I only heard of Crisix before the festival. When the split of days was announced shortly before the festival I was therefore pleased to see that the Friday would be mainly Thrash Metal headlined by Crisix. Arriving at the swimming pools a large tent was waiting for the festival to kick off. In it not too many visitors yet and some heaters to fight the cold. A quick glance at the audience and the last issue of Loud! made me remember a quote in Kerrang in the early eighties. At the time Holland was among the leading countries for underground metal and Aardschokdag was one of the first large underground festivas around. When Kerrang reviewed the edition where Venom would appear on stage, but not play a famous quote I always remembered was: "Anyone wearing a Journey T-shirt would probably have been lynched by the crowd". Well the feeling I had tonight was not that different. So let the madness begin I thought. 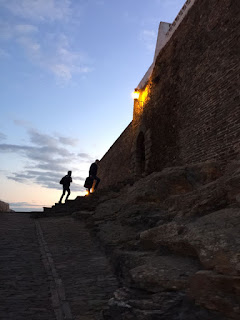 Opening band was Thrashwall from Évora itself. This quintet played not surprisingly Thrash Metal Due to home game they managed to get some people pitting in circles. I liked the fast guitar solo's, but as a band I was not that impressed. It looked and sounded like all could play their instrument, but not necessarily together very well. The breaks sounded messy and at times a hickup in songs appeared. What made up for that was their enthusiasm and obvious pride to be on the EMF stage. Next on were Ghold from England who gave us something completely different. Drums, bass and guitar plus three mics, giving us building walls of sound,with three man shouting at times. I could not really describe what was going on, but it did impress and this was a show on stage. As they had the nicest T-shirts on sale and temperatures kept on dropping I got one as a souvenir, plus the CD when I left. Later talking with the guitarist I mentioned I thought Dutch crowds could be hard to win over. Tonight the Évora crowd showed to be even tougher to anyone not playing Thrash metal. Ghold shall be back in Holland this autumn. Their CD should be played really loud I found out, but the live show was great. 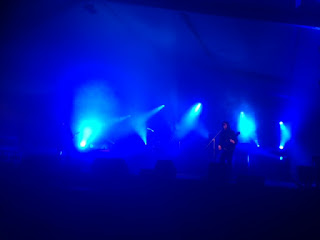 While we started exactly 30 minutes late, the program was followed tight from there on and stage swaps were ready in 20 minutes as scheduled. The next band Stone Dead was the only other non-Thrash band. Although being Portuguese, they received the same lukewarm reaction from a crowd that decided once again to stay en masse far from the stage. Also again I had no clue why. This band played psychedelic, stoner, heavy Beatles rock and did so very well. They had good songs, good presentation and good vocals switching through the band. This band is going to tour Europe, but not reaching Holland. I hope one day D&ESR can get them to play Musicon. Bringing no Merch so no souvenir from them, but a very good band. Then it was time to bring the thrash metal back. First Prayers of Sanity from Lagos Portugal. They exist 10 years and are soon to release their third CD. I could notice this as Prayers of Sanity gave us a professional gig. The audience liked what they got and suddenly crowd surfing and pits appeared in the still not so warm or crowded tent. Highlight to me came in the closing song Evil May Die. Killer song and reason for me to ask the bassist on which CD that song was for buying. The evening was closed by Crisix from Spain and from the start I could tell this band had more international touring under their belts. Bermuda's and T-shirts reminded most of Anthrax, but the music reminded me of several Bay Area bands as well. It is hard to be original in Thrash Metal as we can't all be Vektor. Crisix did give a good show. Well that is for the part I watched, as the moving that week and planned trip the next morning made me leave early. During the walk to my hotel I heard two more songs and this is a band I will check out whe in the area as well. During that same walk home I could conclude my first introduction into Portuguese Metal shows made me look for many more in the future. And I did not even mention yet, that a beer was served chilling cold for one Euro only. 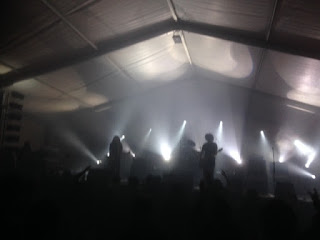