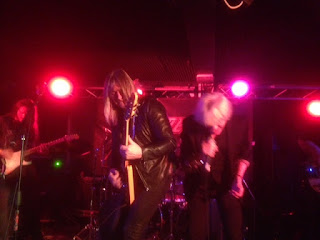 Stampede holding a family tree event under the banner of The Bristol Heavy Rock Explosion. When reading about this show I knew I should be there. Magchiel liked the idea as well, so we went for the full Bristol trip. Starting with the music history I never realized so many great names came from Bristol in the past. Amongst the better known names are Jaguar, Onslaught and Shiva. I did get the CD on the evening in order to  get to know them all. But Bristol has more on offer with a city walk in the morning followed by football in the afternoon. Bristol Rovers FC played Southend in Division One. A full Memorial Stadium presented us a very loud and atmospheric afternoon. With a 2-0 win and in Goodnight Irene one of the biggest football hymns ever to go around a stadium. I shall follow the Gas from now on remotely with more than a bit of interest. Of course a pub with the inclusive greasy burger was on the menu, but in the end it was all about The Exchange in the evening. 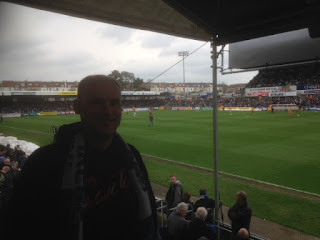 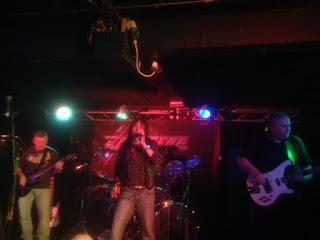 DJ Andy Fox warmed us up by playing many hits from our youth. First band to appear on stage was Stormtrooper. They are not a band from my youth as I did not know them. This is not that strange as their first full album was only released last year. Pride Before a Fall turned out to be a highclass NWOBHM affair with Colin Bond on bass and pedals. Live I was also much impressed by the fast guitars. Almost the full album would be played and the mix of fast rocking In the State of the City,  Still Comin'Home and their ultimate epic Battle of the Eve came over impressive. This was to me a great start of the evening, with a highlight in Drunken Women. In the crowd a lot of women as well. Not drunken,  it seemed to me they were related to the bands. The audience looked like a mix of Old metal fans and friends and family which together packed the Exchange nicely. Patrick from Belgium was there as always, when I go to NWOBHM in the UK. However with pride I can state Holland was the largest overseas crowd represented by three fans. I also had the chance to meet up with legendary NWOBHM author John Tucker, writer of several must read books and many liner notes. 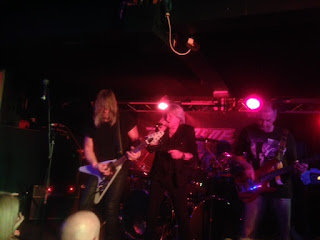 Following band was Lautrec. This forerunner of Stampede has in its line up both Reuben and Laurence Archer. When Stampede's Hurricane town was released on CD four Lautrec songs were added. Tonight would be a short show as only four tracks were played. From that album Red Light Ruby was not played, but the Ballad of Johnny Cool (?) was. It seems that this song was recorded in the past, but never released. As during the evening a possible release of the Bristol Heavy Rock Explosion #2 was mentioned, adding this song alone would make it a collectors item. The performances then. Well Lautrec convinced and seeing Laurence Archer for the first time live, it was good to see a guitar hero of my past riffing and soloing with such ease.  Reuben Archer is one of the great voices in rock to start with and live he proved to be still in very good shape. I also learned that Lautrec around 1980 toured supporting Saxon on their Wheels of Steel tour. This made them decide to go slightly faster and heavier with Mean Gasoline as the result. Resuming Lautrec played short but sweet. 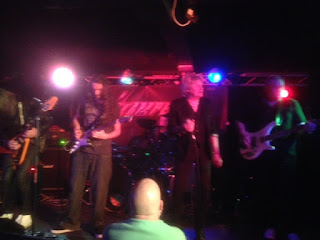 Before writing some words on the Stampede gig, let me give some ballpark justifying my slightly biased views. I do not believe in one favorite band, as there is just too much great music around. Yet if  a shortlist of my favorites would be asked, for sure I'd mention Stampede as well. UFO's Strangers in the Night is in my ears the best live album ever made. Stampede's debut album The Official Bootleg  is  the logical follow up to that Classic. Great songs, a strong band and Reuben and Laurence Archer in the roles of Mogg and Schenker as one of the best voices in rock and a guitar hero respectively. Hurricane Town the album is as good. Both albums are high on my most played ever list. As Stampede is not only about the Archer family it was third original member Colin Bond who got the show running with his bass opening Shadows of the Night. What followed was a mix of old songs and more recent work from 2011's A Sudden Impulse. Highlights to me: all songs. Well mentioning a few specific one can't go around the three guitar line-up When Laurence joined at the end three guitars meant lots of solo's switching over the stage. Chris Clowsley is this stable guitar who together with the rhythm section sets the base for Rob Wolverson and Laurence to fly. Another highlight for me personally was the mic appearing in front of me as invitation to back up vocals on Moving On. While most of my friends consider my singing, well not singing I now got my three seconds of fame in The Exchange. All in all this was one remarkable night where Stampede supported by their predecessors showed us why I loved this music in the early eighties so much. The impact their first show for me had in the Rock Den a few years ago can never be repeated. Still Stampede reconfirmed that apart from their albums their shows are also among my favorite ones. Thanks to The Bristol Heavy Rock Explosion looking out to album#2 and who knows a new show. 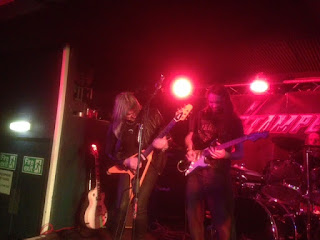